The Worst of Times
A Christian Devotional on Jehovah-Jireh: the Lord Who Provides 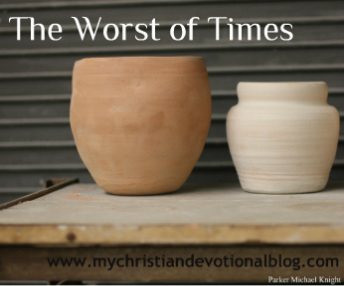 By Debra Torres
The sounds of the school bus reached my ears just a few seconds too late.

“No!” I shouted, frantically waving my hands as it pulled away without my kids.

Desperate, I turned to our vehicle thinking I’d have to use it when I remembered the “low in fuel” message that came up the last time I drove it.


One of the school kids must have seen me waving my hands like a crazy woman, because not soon after that the bus let out its warning signals and began to back up.

Its steady “beep, beep, beep” was music to my ears.

And, after thanking God and the bus driver, I was able to breathe easy again … my kids were on their way to school.

Times were tight and putting extra gas in the tank before payday wouldn’t have been a good idea.

As our country faces one of its worst economic times in history, it’s easy to feel the“pinch” of it right here at home isn’t it?

Maybe for you it means that it’s hard to find work, sell your house or just make ends meet.

I hear you.
I have a friend who, after two years of trying, finally sold his house for way less than it was worth.

Because of that, he had to take out a loan to pay off his mortgage at an extremely high interest rate.

In a Facebook message the other day, he explained how he felt saying, “Talk about kicking a guy when he's down!”
Times are tough aren’t they? But sometimes, when finances hit rock bottom, we need to remember that we serve a God who understands.

I love the Bible story about the widow at Zarephath who had just a “handful of flour and a little oil in a jug” left to feed herself and her son. There was a drought in the land, and the woman was outside collecting sticks for her final cook fire. After their last loaf was gone, she knew they would die.

The first time I heard of the woman, I was trying to decide whether to further my education and move away to graduate school. I had received wise counsel and felt like God was leading me in this direction, but I was afraid.

What if I ran out of money, how was I going to make it? I remember being too afraid to even fill out the financial aid applications.

That Sunday in church, a visiting pastor preached on the widow at Zarephath. You see, she and her son didn’t die of hunger after all. God actually used her to help feed one of his greatest prophets – Elijah.

When Elijah first saw her gathering sticks that day, he asked her for some food. Honest, the woman told him like it was. How could she feed him too?
Elijah attempted to calm her fears by saying this in 1 Kings 17: “The jar of flour will not be used up and the jug of oil will not run dry until the day the Lord gives rain on the land.”

A limitless supply of flour and oil! Wow – now there’s an offer!

What would you and I do if we were in her situation, I wonder?

Well, I know that the woman mustered what little faith she had and decided to trust Elijah and his God.

And, it was a good thing too, because in 1 Kings 17:15-16 it says: “So she did as Elijah said, and she and Elijah and her family continued to eat for many days. There was always enough flour and olive oil left in the containers, just as the Lord had promised through Elijah."

That day when I heard the sermon on the widow of Zarephath I decided to fill out my financial aid forms and trust God for his provision. And, boy, did he provide. I ended up getting a full scholarship because of my previous involvement in a youth ministry.

Sometimes I think we’re leery of asking God for things like money – isn’t it the root of all evil after all?  But I think that asking and trusting God for his provision is a different thing entirely. As long as we’re in line with his will, we shouldn’t be afraid to ask.

After all he is Jehovah-Jireh: the Lord Who Provides.
Here are some Bible verses that'll help you on your journey:

Once I was young, and now I am old.
Yet I have never seen the godly abandoned
or their children begging for bread

Let them shout for joy, and be glad, that favour my righteous cause:
yea, let them say continually, Let the Lord be magnified, which hath pleasure
in the prosperity of his servant. And my tongue shall speak of thy righteousness and of thy praise all the day long.

Take delight in the Lord,
and he will give you the desires of
your heart.