What's in Your Harvest?
A Christian Devotional on Contentment 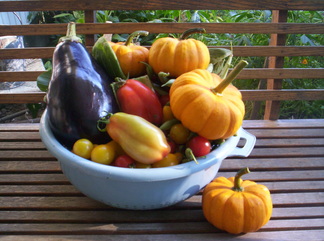 By Debra Torres
If you’re like me, you’re scavenging up those last green tomatoes and tiny peppers in your garden, hoping to bring in one more late harvest before it all goes into the deep freeze for the season.

My late tomatoes aren’t getting any riper on their dwindling vines, so I’m going ahead  and picking them, figuring that they’ll have a better chance ripening in our warm house. And those green pumpkins that just never made it to orange are now sitting on my deck in hopes that the waning sun will do a better job in that spot.

I love my home garden, and anything I harvest out of it becomes an extra-special addition to our family meals. But the one thing I’ve learned as a vegetable/flower gardener and novice orchardist is that the growing process can be, well, brutally unpredictable.
I mean, you never know what you’re going get when you “grow it your own” do you?

Last year, I sought long and hard to find even a handful of apples on my apple trees, but this year we grew so many that I’ve already made two batches of applesauce, a pan of apple crisp, and I’ve not even touched the bulk of juicy red fruit that hangs from my tree.

The heavenly blue morning glories that twirled up my front porch trellis last year welcomed us each morning with a billowing sky blue cloud.

This year, I’ve got a measly creeping vine that shoots out one bloom a day at best.

And after two years of battling the blight, this turned out to be a banner season for the juicy, red tomato. Since I didn’t can this year, I was eagerly seeking new and wonderful ways to use my scarlet beauties and their little cherry berry counterparts.

Well, at least until my eldest daughter cried out: “Enough pasta, Mom!”

Ahh… a good garden can offer you seasons of plenty and seasons of want can it? Kind of like life isn’t it?

When my husband went back to further his education a while ago, our family finances dipped to an all-time low. I remember frequently visiting our town’s food banks and local churches’ clothing closets just to get by.

Even though we knew that the extra education would prove to be beneficial in the long run, it wasn’t easy making ends meet while were in the thick of it. We were definitely in a season of want.

Now, on the flip side, we’ve also experienced some seasons of plenty. During these times, it wasn’t so difficult to purchase the things we needed and, at times, we even got to splurge on some of the things we wanted.

If you’ve been through periods like this, you know they can do a number on your emotions. Fluctuating finances can take us through the wringer as we deal with feelings of anxiety, fear and even despair.

When I think of monetary lows and highs, I am reminded of the Apostle Paul who went through intense trials in his ministry. You can imagine that Paul experienced some serious inconsistencies in his bank account. I mean how stable was the job of an evangelist in the early Bible times? Not very, I’m sure.

But Paul had a secret that he willingly reveals in Philippians 4:11b- 13: “I have learned to be content whatever the circumstances. I know what it is to be in need, and I know what it is to have plenty. I have learned the secret of being content in any and every situation, whether well fed or hungry, whether living in plenty or in want. I can do all this through him who gives me strength.”

Can you imagine how we would be changed if we practiced Paul’s example on a daily level?

Being content with whatever is in our cupboard, our closets and our garages? I’m not saying that we shouldn’t work for something better, but I think that approaching our present situation with contentment would help a whole lot.

So, if you spot a gardener with a sour look on his face because his eggplants were a flop this year, give his shoulder a squeeze and remind him of Paul’s secret. For the greatest harvest, no matter what the season brings, is a harvest of contentment.

Keep your lives free from the love of money and be content with what you have, because God has said, “Never will I leave you; never will I forsake you.”

Once I was young, and now I am old. Yet I have never seen the godly abandoned or their children begging for bread.