Was it a God Wink?
The Christian Blog that gets you thinking ... 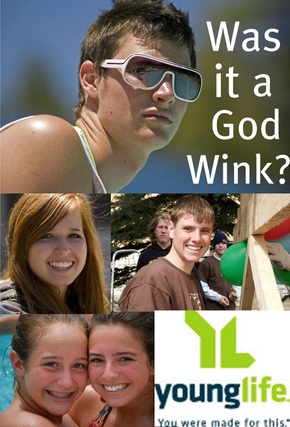 By Debra Torres
It was a rainy afternoon, and the lunch plans that my friend Terri and I made were a bit spoiled by the weather.

We were going to eat at an outside fast-food restaurant that had killer french fries.

But because of the rain, we settled for Taco Bell instead.

I was single back then, recovering from a heart-wrenching break up.

It was friends like Terri that helped me through that tough time.

We were just digging into our burritos when I looked up to see my old boyfriend in line. Yikes! How could he show up there at the same place at the same time as me? I had no place to hide. We were quickly spotted, and he came over to eat with us.


Was it coincidence that we ended up eating lunch at the same restaurant  or was it a “God wink”?  I’m thinking the latter because that man later became my husband.

God winks are often explained away as being coincidences. But, when we really look at a situation, we find that the chances of everything lining up so perfectly can be far from coincidental.

It’s the hand of God.
_ In his book “When God Winks,” former cable television president and CEO, SQuire Rushnell encourages us to look for the God winks in our own lives.

Describing them as personal signs or messages that come from God in the form of coincidence, Rushnell encourages us not to miss these special moments for what they truly are:

“Your life is not a series of random experiences taking you like a twig on a moving stream to destinations unknown. You are part of a much greater plan. Raising your consciousness to the God Winks that often go by unnoticed or get dismissed and recognizing them as tremendously personal will reaffirm that your existence is not random and that you do have a role to play in life’s grand plan.”

For two years in college I was involved in a global teen ministry called Young Life.  Because of this, I got to have a blast with high school kids on “Club” nights, go to camp with them, and even have the privilege of leading some of them to the Lord.

It’s been nearly 25 years since my Young Life days and my contact with Young Life folk has been slim to none.

Recently though, a man met with my husband and me about bringing Young Life to the teens of Clarion County, Pa.* I had been praying about being part of this endeavor  -- going back and forth in my decision about committing my time and effort to their board.

Tonight, I think I got my answer.

My daughters and I were in Taco Bell (again!) when suddenly the small restaurant began to fill up with a busload of teenagers.

I sat munching on my burrito when I noticed something special about the teens.

Most were wearing Young Life T-shirts, sweats and hoodies! (Now, remember, I’ve not seen a Young Life teen for over 20 years.)

After talking with one of the teen girls, I found out that they were returning home from a Young Life summer camp and were heading back to Ohio.

Now, what are the chances that I spontaneously decide to take my girls to dinner and a bus full of Young Life teens stop in?

Coincidence or God wink? Yeah, I’m going with the wink too.

It is a comfort to know that God is interested in the stuff we’re interested in, and he’s always working on our behalf. We just need to be looking for the “winks.”

Rushnell encourages us to keep our eyes open: “Look for God Winks! The highway to what you believe to be your destiny may occasionally seem dark and lonely. But you are never alone. Get going, and start looking for the confirming signs that you are on the right path. You’ll soon see the God Winks—the coincidences and answered prayers—reaffirming that your life is being directed by a super global positioning system.”

I’m not saying that all coincidences are from God, and of course you need to measure everything carefully with prayer and God’s word. But, I’ve had enough God winks in my life to know that it pays to be on the look out!

God cares about the things that you care about, so watch out -- your answer to prayer might just be coming in the form of a wink today!

For the eyes of the Lord run to and fro throughout the whole earth to show Himself strong in behalf of those whose hearts are blameless toward Him.

Many, LORD my God,
are the wonders you have done,
the things you planned for us.
None can compare with you;
were I to speak and tell of your deeds,
they would be too many to declare.

And we know that God causes all things to work together for good to those who love God, to those who are called according to His purpose.