How Hard is it to Take Every Thought Captive?
​ -- real hard. 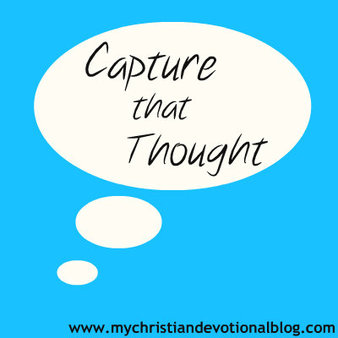 By Debra Torres
The mouse that frequented the counter space behind my toaster must have enjoyed the buffet of forgotten breadcrumbs we provided it – because it kept coming back.

And, judging from the “presents” it left for us, I knew it was telling me that it was enjoying its stay.

Each time I saw evidence of that mouse, I’d remove everything from the counter and clean it with a good antibacterial spray. I knew from the get go that mouse needed to leave.

So, I asked my husband to do the deed, and he worked as humanely as possible placing a bit of peanut butter in a trap that would capture the mouse but not kill it.

He placed the trap back where the toaster had been, and we hoped for the best.

But the trap that had caught many a mouse already for us was no match for this toaster mouse.
It sampled the peanut butter and had been caught – but only temporarily. When we checked the trap later, we were shocked to see that the mouse had gnawed its way to freedom.

We were dealing with a very clever mouse.

“I’ve given that mouse every opportunity to live through this,” my husband said holding up a new glue trap. This trap would entice the mouse into its cardboard cave lined with sticky glue and capture it there for quick disposal.

The trap sat for a few days with no activity until one morning, when I happened to glance at it while busy in the kitchen.

And I couldn’t believe what I saw.
A portion of the cardboard trap had been chewed through and pieces of cardboard and mouse hair were strewn over the trap and my counter. And the mouse?

It was nowhere in sight.

Trying to capture a mouse can be frustrating and even comical sometimes. My husband told me that the whole scene reminded him of the movie, “MouseHunt,” and we wondered it we had a mouse of the same breed as the one in the movie.

But when I thought about how hard it was to capture that mouse I was reminded of a something else I was difficulty holding captive that day.

You see, in 2 Corinthians 10:5 it says that we are to literally take captive wayward thoughts and make them obedient to Christ. This means that we aren’t to welcome in thoughts that don’t line up with the Word of God.

I began to learn more about this when I studied about spiritual warfare and I’ve found it a tough, but worthwhile exercise – one that will probably take me a lifetime to master.

The president of my Christian university made this analogy to the concept once while speaking in our chapel service: “You can’t stop the birds from flying over your head,” he said, “but you can stop them from making a nest in your hair.”

What that means is we don’t give all thoughts a welcome mat into our minds. What kinds of thoughts am I talking about? They’re the ones that take our eyes off God like fearful or nagging thoughts, jealous or tempting thoughts, anxious or worrisome thoughts. Any sound familiar?

Actually, the Bible gives us a nice litmus test that can help us decide which thoughts are okay to dwell on: “Finally, brothers and sisters, whatever is true, whatever is noble, whatever is right, whatever is pure, whatever is lovely, whatever is admirable—if anything is excellent or praiseworthy—think about such things” Philippians 4:8.

When we get a thought that doesn’t fit any of the above, it’s a good idea to give it immediately to God. And I’ll be the first one to tell you that it’s not easy. But because God tells us to do it – I am reassured that it is possible.

And the more I do it, the better at it I become.

“Let me put it another way: If we think fleshly thoughts, wrong thoughts, negative thoughts, we cannot walk in the Spirit. It seems as if renewed, God-like thinking is a vital necessity to a successful Christian life.”

Capturing our thoughts is tough, I know. It’s often a daily spiritual exercise for me. And do negative thoughts like to be caught? No way.

Just think of my mouse. Sometimes they “get out” and keep trying to come back. Here’s where we need to be diligent and enlist the help of God.

So, go ahead… capture that thought!
Here are some Bible verses that'll help you on your journey:
2 Corinthians 10:5 English Standard Version
5 We destroy arguments and every lofty opinion raised against the knowledge of God, and take every thought captive to obey Christ,

Proverbs 23:7a Amplified Bible
7 For as he thinks in his heart, so is he.