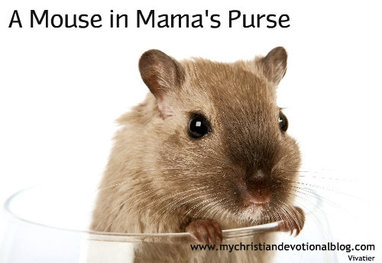 It was the middle of church and my daughter whispered to me that she was hot and needed a hairband.

Pulling out my purse, I started to rummage through when a strange glint of metal caught my eye. It was foil-like with jagged edges and there were lots and lots of them at the bottom of my bag.
What in the world?

Digging more, I noticed that the shiny foil wrapper of my protein bar had been torn into. I liked to carry protein bars in my purse for hunger emergencies, but this one not only had a shredded wrapper – it looked like it had been … gnawed. Eeew!
I half expected a brown furry creature to poke his head up out of my purse right there in church and bite my searching hand.

As the realization that my bag had been invaded unfolded, I began to put the pieces together. At home, I kept my purse in a closet that obviously was home to something other than my bag. It was a warm, cozy spot and the food in my purse, well, that was probably just an added plus.

Discoveries like this can be kind of shocking can’t they? And you know, there’s a small, uncomfortable feeling that comes when our personal items have been violated.
Maybe that’s why I gave my purse a good scrubbing and was careful to choose a different place to store it.

But, like most people, my resolution to be cautious lasted only a few days. Later, when my kids needed a snack at a sporting event, I threw a few graham crackers into a baggie and took them along in my purse.

Well, you can probably guess what happened, right? Some graham crackers remained, I forgot and put my bag in its old storage spot and … I had another visit that evening.

Disgusted, I held up the gnawed baggie the next day and knew that something had to be done. Mice could carry disease and I couldn’t risk it anymore.

Now, many of you probably haven’t had a mouse in your purse like me, but I think maybe you’ve had discoveries like mine that were equally surprising.
And, I’m not talking about things we can see here – I’m focusing on the things we can’t.

Everyday during my prayer time, I like to “clean house” asking God to forgive me for all of my sins and to show me where I need to repent. After this, I’m quiet for a bit, giving God the opportunity to bring anything to my mind.

Sometimes, I get an impression of a sin area and sometimes I don’t. But, as you know God’s timing is not the same as ours.

The other day, I was thinking about some folks who have hurt me. Now, these were nice folks, but there was something about our relationship that wasn’t quite right, and I had just set that hurt aside and let it be.
Well, you know that’s a good recipe for bitterness, right?

The other day, I was thinking about the folks again and was a bit surprised when God revealed to me that I was harboring unforgiveness towards them.

It was almost like looking into my purse and seeing that shredded wrapper again. Me??? Unforgiveness??? Well now, how did that get in there?

But God was right (as always) and I’ll tell you how I know. When I obeyed God and went ahead and said the words – “I forgive them, Lord” a great weight lifted off of my shoulders.

The people probably didn’t even know that I carried that unforgiveness towards them – and you know what? Most likely they had no idea that they had even hurt me.

But God did, and he knew the unforgiveness wasn’t good for me.

Sometimes we are surprised by hidden sin like I was, and sometimes we know it’s there but like to keep it buried deep in the pockets of our heart.
If nobody knows about it – it’s okay right? I mean, it’s not hurting anyone.

But you know, it would be kind of the same thing if I ignored my mouse problem and kept on storing snacks in my purse. I would just be feeding it.

And you know what you get when you feed a mouse right?

John MacArthur of the “Grace to You” media ministry says this: “No sin — not even a whispered curse or a fleeting evil thought — is hidden from the view of God.”

Wow. There’s no getting around it. Things we think are safely tucked away aren’t concealed from God are they?

MacArthur also says this, “… secret sins will not remain secret. ‘The Lord [will] bring to light the things hidden in the darkness’ (1 Cor. 4:5). Jesus said, ‘There is nothing covered up that will not be revealed, and hidden that will not be known. Accordingly, whatever you have said in the dark shall be heard in the light, and what you have whispered in the inner rooms shall be proclaimed upon the housetops’ (Luke 12:2-3). Those who think they can evade shame by sinning in secret will discover one day that open disclosure of their secrets before the very throne of God is the worst shame of all.”

So, if our secrets are not so secret when it comes to the searching eye of God, why bother hanging on to them? When we discover a secret sin, it’s best to clean out and get rid of it isn’t it?

I mean, who wants to deal with a whole lot of mouse droppings?

9 If we confess our sins, he is faithful and just and will forgive us our sins and purify us from all unrighteousness.

13 Whoever conceals his transgressions will not prosper,
but he who confesses and forsakes them will obtain mercy.