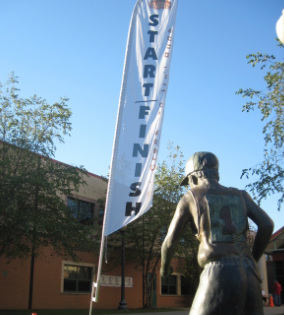 By Debra Torres
The star-studded night boasted a nearly full moon as I stood out on my front porch thinking of my niece Jenni.

She was out there somewhere in the thick of the night winding her way through the wooded trails of the Oil Creek 100 mile race.

Jenni, an ultra runner, had started the race at 5a.m. that Saturday and had till 1p.m. on Sunday to finish.

As I poked my head out into the night that evening, I was glad for the moon, knowing that it helped light her way.

I woke up several times that night thinking and praying for Jenni who was running the last half of her trek.

I knew that every cell in her body probably ached to see that finish line.

Was pain blasting through her tired muscles? Or, were blisters the size of quarters threatening to burst?

Either way, I knew Jenni would do all it took to see the finish line.
When I talked with her the night before her race, I was able to get into Jenni’s head a bit and find out just what long distance running was teaching her. Jenni told me that often as she’s running through the wee hours of the morning with the pain of the race hitting her with every stride and her eyes begging for sleep, she’ll think of the concept of long suffering.

Oh, Jenni knows that her battle with pain will end at the finish line – lasting no more than the 30 + hours it takes to run 100 miles. But when she works though it, she begins to think a little more about others whose lives run deep with pain.

They don’t have it so easy, Jenni explained, because you see, unlike herself, they’ve got no finish line.

People all around us suffer don’t they? We see it on the faces of parents strolling their handicapped child past us at the mall, or we hear it in the voice of a coworker as he works his way through the tangled pain of divorce, or we feel it in the embrace of a friend who’s dealing with the death of a loved one.

Does God shut his eyes to their suffering – does he leave no provision for their hurt?
I was intrigued as I watched Jenni prepare for her race. She showed me the nutrient-rich foods that she would take with her along the trail.

Her husband later told me that an ultra runner burns so many calories during their race that they have to eat often. The race crew provides special aid stations for the runners to grab a quick bite, but on top of

that, he said that the runner has to eat along the trail as well – just to sustain themselves throughout the race.

Just as Jenni gained sustenance by “eating on the run,” so must we be spiritually “fed” along our own journey. When we reach for him, God has a way of carrying us through our difficult times.

I love the redeeming role of Christ depicted throughout Isaiah 61:1-3: He binds up the brokenhearted, proclaims freedom for the captives, releases the prisoners from darkness, and comforts those who mourn.

Motivational speaker and author Bobby Petrocelli became acquainted with long-suffering late one night when a pickup truck driven by a drunk driver crashed into his bedroom wall and turned his life upside down.

Petrocelli was a newlywed then, and the crash left him a widower in a matter of ten seconds. And he not only went through the pain of losing his wife, but had to work through his own physical trauma as well.

When Petrocelli finally came to a point of reckoning with God, he felt his Savior’s warm arms wrap around him at his wife’s gravesite.

In his book “Triumph Over Tragedy” he writes about the experience, “God was saying to me that He was always going to be there, because He loved me. This was a turning point. It marked a change in my heart. I now saw and had actually felt first-hand that God had something special planned for my life. I came away with a new attitude. God had revealed Himself to me that day. I knew God’s grace and mercy would sustain me. My life was changed.”

Well, Jenni reached her goal on Sunday, I’ve seen the smiling faces in her pictures to prove it. She scooped up her 2 year-old in her last few steps and sailed through that finish line. What an accomplishment!

Are you on a tough road today? He waits for you.

Blessed be the Lord, Who bears our burdens and carries us day by day, even the God Who is our salvation! Selah [pause, and calmly think of that]!

Give your burdens to the Lord,
and he will take care of you.
He will not permit the godly to slip and fall.

Come to Me, all you who labor and are heavy laden, and I will give you rest. Take My yoke upon you and learn from Me, for I am gentle and lowly in heart, and you will find rest for your souls. For My yoke is easy and My burden is light.”