Did Jesus Raise Bodily?
Find out in this eye-opening Easter devotional 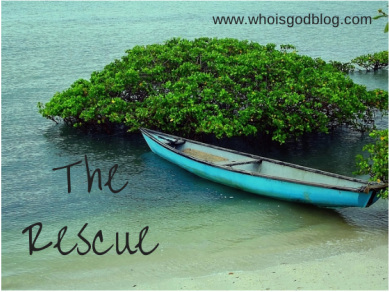 By Debra Torres
The lake was calm and inviting. And as we started out with our assorted floaties, I mistakenly concluded that the other side wasn’t all that far.

It would be an adventure, I thought, to take the kids over. We could say we swam the small, residential lake and had fun doing it.

At first our moods were light and cheerful. I had some of my kids with me and another little friend, and everyone kicked and splashed with their tubes and floats. What a perfect day.

But around the time we got to the middle of the lake, I began to sense we were in a bit of trouble.

Trying to the get to the other side wasn’t so much fun anymore. We were all getting tired, and it seemed like no matter how hard we kicked, we still seemed to stay in the same spot.

And the other side of the lake wasn’t getting any closer.

Ugh! Here I was now in the middle of the lake with three young children and we were all worn out.
That’s when someone paddled by. The kind woman in the canoe-like craft started chatting with us, learned of our predicament and unexpectedly offered us a tow.

At first, we got in line and hung on to each other’s ropes, but the weight was too much for her, so instead she gave some of us a lift unto the back of her craft– two at a time to the dock.

What a relief it was to be back on shore. And you can believe my children had a good tale to tell when we returned home.

It had been a rescue of sorts, and we were grateful for the help.

This past Sunday, our pastor spoke of a different kind of rescue as he highlighted the resurrection of Christ in our Easter service.

Speaking from 1 Corinthians 15, he focused on the significance of the actual resurrection event and explained how it’s instrumental to our faith.
Jesus did not “faint or swoon” on the cross our pastor said. Trained Roman soldiers, who knew exactly what death looked like declared him dead. He also said that the act of resurrection refers to the body of Jesus not to his spirit or his teachings, as some believe.

“If Jesus did not raise bodily in Christ then we are a sad group of folks here this morning,” our pastor said. “That resurrection is foundational for the rescue plan God had.”

It’s interesting to note that many faiths outside of Orthodox Christianity do not believe in the bodily resurrection of Christ.

Jehovah’s Witnesses believe that Jesus rose as a spirit creature and that God took away his material body. And some Muslims believe that Jesus was raised up to God before he died. And most Jews, of course, believe that no resurrection took place at all.
But why is it so important to our Christian faith? I have to admit, I haven’t thought a lot about it.

Henry Morris, Ph.D., of the Institute of Creation Research answers our question in his post: “Religion and Resurrection”: “Mohammed is dead, and so are Buddha and Confucius and Moses and all other religious founders and leaders. But Jesus Christ was living and then was dead and now is 'alive for evermore' (Revelation 1:18).

"We need never be in doubt as to which religion is true. True salvation is provided only through the Lord Jesus Christ, who died for us to pay for our redemption from sin and death, and then rose again from the grave to assure us that the price has been fully settled and paid. Now, all who receive by faith this free gift of salvation can be assured that they also will be raised out of death into a glorious heavenly future which will never end.”

Simply put, we can be assured that, because of Christ’s work on the cross, we too, can have the hope of eternal life.

I have a friend who’s in a deep, dark hole. He’s dug a pit so deep for himself that I doubt he sees any light from his perspective. He questions the existence and authority of God.

The Easter story and particularly the resurrection, tells the tale of one who is willing to climb into all our pits no matter the stink. It’s a story of one who willingly was beaten, bruised and killed for the sins of all.

He came for you, for me and as for my friend, well, I know that he came for him as well.  And I look forward to the day my friend takes a firm grasp onto the outstretched hand of his rescuer.

Hallelujah! He has risen.

Here are some Bible verses that'll help you on your journey:
1 Corinthians 15:14 New International Version

14 And if Christ has not been raised, our preaching is useless and so is your faith.

31 because He has appointed a day on which He will judge the world in righteousness by the Man whom He has ordained. He has given assurance of this to all by raising Him from the dead.”