The Other Slipper -- and the Hope of Easter 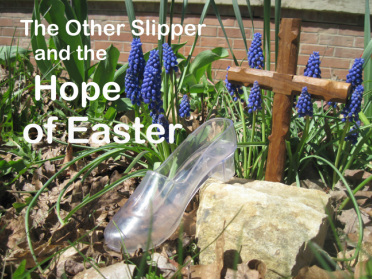 By Debra Torres
I’ve discovered that having five children has many benefits.

One of them, I have to say, is getting to watch my favorite Disney movies over and over again.

Shows that my older kids have outgrown are now new and fresh to my younger ones.

One thing I’ve noticed happening to me as I view these movies for the second, third, and even eighth time, is that certain lines will jump out at me, and I’ll really get the message that the screen writer was trying to get across. It’s one of the advantages of repetition I guess.

An absolute favorite of my “ah ha” movie moments came one day while we were watching Cinderella.

Now, Disney may not have meant its message exactly the way I took it – but hey, to each her own.

I’ll paint the familiar scene for you: Cinderella has been locked up in her room by her wicked stepmother.

The grand duke has come to call looking for someone to fit into the single glass slipper left behind by a mysterious beauty at the prince’s ball. Now, the delicate shoe is tiny and Cinderella’s ugly step sisters make an effort to shove their big size 10s into it.

The grand duke is about to give up hope at ever finding the prince’s true love, when he asks one more time if there are any other ladies in the house.

The wicked stepmother, thinking Cinderella is still safely locked in her room, lies and says, “No.”
Then a sweet, feminine voice rings from the top of the stairs, “Your grace,” Cinderella says, “may I try on the slipper?”

The page bustles over to Cinderella with the dainty slipper perched safely atop a soft pillow.

The wicked stepmother sees her chance, sticks out her cane and trips the clumsy page.

The slipper flies through the air and lands on the hard floor crashing into a million pieces.
All seems lost now doesn’t it? Viewers of this scene suck in their breaths and feel, maybe just for a moment, that evil has prevailed.

I mean, how will Cinderella prove anything without the telltale slipper? How will she get out from under the oppressive thumb of her wicked stepmother and her bratty stepsisters? How will she find her way back to the prince?

The resilient Cinderella says to the grand duke, “But perhaps if it would help…”

“No, no. Nothing could help,” the distraught duke says.

But choosing to help anyway, Cinderella says: “But you see … I have the other slipper.”

Ah! There it is! Do you see it? It’s the resurrection story all over again!

When Jesus died on the cross, his followers thought that was it.

Their hopes of him being the promised Messiah crashed down around them like the tiny shards of the broken slipper.

And Satan probably felt quite victorious at that scene.
Just as the wicked stepmother, I’m sure that the devil felt that he had succeeded in his vile plan. It was a special night for him I’m sure. After all, it looked like man’s hope of salvation was destroyed.

Three days in the tomb proved him wrong, didn’t it?

There was “another slipper” pulled out of the heavenlies that weekend and three women discovered it when they arrived to an empty tomb on that first Easter morning.

Can you imagine the collective breath that went out of those who found out the truth that day?

Hope was not lost after all. It had been restored.

The resurrection can mean a lot of things: victory over the grave, the unstoppable power of God, the beauty of redemption.

I love them all, but I think for me and for all you Cinderella fans out there, one of its most powerful messages or the resurrection is hope.

After all, we have the other slipper -- Jesus Christ the hope of glory.

May you be filled with joy, always thanking the Father. He has enabled you to share in the inheritance that belongs to his people, who live in the light. For he has rescued us from the kingdom of darkness and transferred us into the Kingdom of his dear Son, who purchased our freedomand forgave our sins.

1 Corinthians 15: 56-57 (New Living Translation) For sin is the sting that results in death, and the law gives sin its power. But thank God! He gives us victory over sin and death through our Lord Jesus Christ.

To whom God was pleased to make known how great for the Gentiles are the riches of the glory of this mystery, which is Christ within and among you, the Hope of [realizing the] glory.