Are You an Alien?
Did you know that you are called to be different? 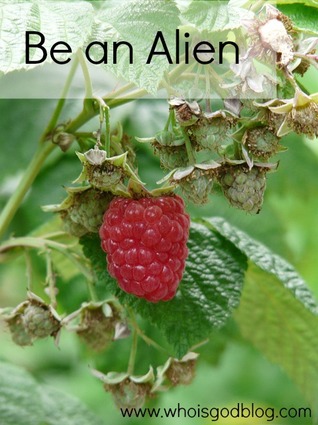 By Debra Torres
I’ve just come in from my raspberry patch where I’ve been working diligently for the past few weeks.

The patch grows in a nice-sized square at the back of my vegetable garden and up until last year, it was a disaster.

You see, right along with my neatly planted rows of raspberries, the dandelion, wild aster, creeping charlie and assorted grasses grew.

What I had initially hoped for out of my patch became a mangled mess of weeds that competed heavily with my berry plants.

And as a result my plants were sickly and prone to disease and gobbling pests.

I had several remedies in mind for my failed raspberry patch, including demolition, but never followed through with any until last year when a desperate plan popped into my head.

Even though the raspberries multiplied by sending up new shoots underground, I decided to forgo that blessing and, for the sake of the patch, surround every shoot with black plastic. My plan was to smother the weeds and give the raspberries a chance to have the patch all to themselves.
I’m sure all of the berry experts out there would have shaken their heads at my idea, but it’s all I could think of to control the weeds.

So, I got to work early one spring and covered all the rows but one before the demands of my vegetable garden took me away from the job.

And guess what? It worked!

And the fruit? Well, let’s just say we had our fill of raspberries last summer.

As I watched my plants grow that year, I also took note of the row that I had left uncovered. The weeds had their way in that spot as usual, and the raspberry plants that grew there looked stunted and sickly, just like they had in previous years.

While comparing my two types of plants, I began to think about how, as Christians, we can get caught up in the weeds of the world.  Right along with everyone else, we compete for the latest technology and the shiniest car. We want the nicest homes and the largest incomes. But at what price?

I think that if we allow ourselves to be motivated by the same things as the rest of the world, then we’ll find ourselves stunted.

God has us on earth for a reason, and I have a pretty good inkling that it’s not to conform to the same lifestyle as everyone else. In fact, he calls us to be so different that people might just consider us a little odd.

Peter explains why this is important here: “Beloved, I urge you as aliens and strangers to abstain from fleshly lusts which wage war against the soul. Keep your behavior excellent among the Gentiles, so that in the thing in which they slander you as evildoers, they may because of your good deeds, as they observe them, glorify God in the day of visitation” (1 Peter 2:11-12).

That means were supposed to be noticeably different, like an alien, aren’t we?

Acting in a way that is unfamiliar to others can mean doing simple things like I saw a church do once. They held a “free” yard sale. When community members came to shop, I’m sure they were amazed that they didn’t have to pull out their wallets.

Most people probably thought this was a little strange but took notice of their good deed.

And sometimes we can be “strange” by responding in the opposite spirit when we are offended.

Recently, I received a message from someone who was very angry. After reading it, I waited a bit before responding. And when I finally did, I made sure to focus on the person’s pain rather than my own feelings. Sending the message, I hoped that the person sensed the love of Christ.

And I’m guessing they were a little surprised.

Just because we’re in the world, doesn’t mean that we have to be of it. Shutting out the weeds of the world can make us more useful to God.

I’ve just finished covering most of that last row for this year’s raspberry growing season. It felt so good to survey that spot when I was done, knowing that the plants now poking their leafy heads out of their new black plastic holes had a fighting chance this year.

To me, they already looked healthier. They’ve got nothing to compete with and can focus on doing what they’re created to do: growing and developing ripe, juicy fruit.

And that’s good, because I’ve got a craving for cobbler.

Here are some Bible verses that'll help you on your journey:
Romans 12:2 New International Version

2 Do not conform to the pattern of this world, but be transformed by the renewing of your mind. Then you will be able to test and approve what God’s will is—his good, pleasing and perfect will.

22 The ground covered with thistles represents a man who hears the message, but the cares of this life and his longing for money choke out God’s Word, and he does less and less for God.

15 Do not love the world nor the things in the world. If anyone loves the world, the love of the Father is not in him.