Crazy for Christ:
Writing Bible Verses on the Walls of your Home 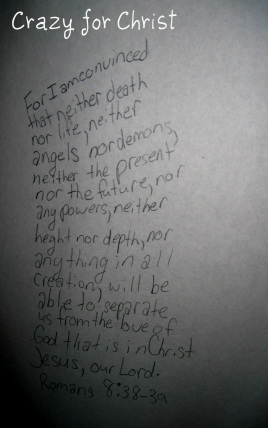 By Debra Torres
_ Our painter gave me a strange look when I made my request.

He was in the process of putting primer on our walls when I told him that I wanted to write some scriptures on them before he covered them with paint.

I’m sure he thought I was a bit crazy. Why write something only to cover it up? But, well, writing scriptures on unpainted walls is kind of a tradition for me.

Long ago, when I was student, I lived with a professor and his wife.


Their home was beautiful with its high ceilings, a bedroom loft and its rich green family room walls.

But the best part about their home was how you felt when you were in it.

It had to be one of the most peaceful places I had ever lived.

I remember commenting about it to the professor’s wife one day, and she told me about the scriptures.

She said that before they painted, they wrote the word of God on the walls of their house.
_ Hmm, I liked that.

It reminds me of the scripture in Deuteronomy 6 where Moses encourages the Israelites to write God’s laws on their doorframes and gates.

So now, when we paint, the word of God gets kind of embedded in our house too.

A little crazy? Maybe. But you see, well, I’m not from here.

Susan* made a “Jericho walk” around a friend’s apartment recently.

Walking and praying, she’s followed what she felt God told her to do.

You see, her friend has thick walls built up around his heart – they’ve been there since he was a kid. And Susan feels it’s time for them to come down. So she’s taking the pilgrimage.
Just like Joshua in the Bible walked around the city of Jericho, Susan marched around her friend’s apartment.  And I’m praying with her that those walls will come a tumblin’ down!

A little weird, huh? Maybe. But you see, Susan’s not from here.

Let’s take some of the Bible’s prophets like Isaiah, Jeremiah and Ezekiel for another example. To get a whole Bible books named after them, they had to be pretty important right?

They probably wore purple robes and had adoring crowds hanging on to their every word right? Wrong. It’s painful, really, to hear about how these men of God were treated and sometimes ignored.

They even had to do some pretty strange things to symbolize the state of God’s people.

If you read the books, you might feel that the prophets were a bit loony right?

Perhaps -- but they weren’t from here either.

You know, if you’re a Christian today, then this isn’t your home either. Often, we get caught up in the traditions, culture and trappings of this world, and we forget that this isn’t “it.” It’s not our final destination.
_ In fact in 1 Peter 2:11 we are actually called “strangers, aliens and exiles.” So you see, what I mean when I say that we are not from here. This is a comfort to me sometimes when the world shows its dark and ugly side.

After our painter had covered over our scriptures with a coat of thick, white paint, he surprised me when he came into my home office with an old baggie filled with tiny books.

_ “Is this yours?” he asked, telling me that he found them stashed up in one of our vents.

“No,” I said excitedly, wondering what the buried treasure could be.

Opening the dusty bag, I found it to be filled with the greatest treasure of all – Bibles! There were several New Testaments, a Sunday Missal, etc.

“Ha,” I said to our painter, “It looks like the people who owned this home before us had their own way of hiding God’s Word in their house.”

I think he may have cracked a smile when I said that.

*Susan’s name has been changed to protect her privacy.
Here are some Bible verses that'll help you on your journey:

Beloved, I implore you as aliens and strangers and exiles [in this world] to abstain from the sensual urges (the evil desires, the passions of the flesh, your lower nature) that wage war against the soul.

All these people died still believing what God had promised them. They did not
receive what was promised, but they saw it all from a distance and welcomed it.
They agreed that they were foreigners and nomads here on earth.

So now you Gentiles are no longer strangers and foreigners. You are citizens along with all of God’s holy people. You are members of God’s family. Together, we are his house, built on the foundation of the apostles and the prophets. And the cornerstone is Christ Jesus himself. We are carefully joined together in him, becoming a holy temple for the Lord. Through him you Gentiles are also being made part of this dwelling where God
lives by his Spirit.