A Wolf in Sheep's Clothing ...
A Christian devotional on using discernment in relationships 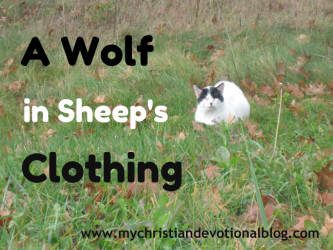 By Debra Torres
We first started seeing the black and white tomcat sometime in midsummer. He’d sit in the tall weeds near our barn and run off when we’d get too close.

Jokingly, we called him our calico’s boyfriend and thought nothing of it since all our cats are “fixed.”

But recently, I noted the tom getting a little “chummier” with me. When I’d go out to feed our three females, he’d always be there waiting-- just about five feet away from the door of the barn.

I named him “Tom-Tom” and tried to make friends -- even inviting him to slip into the barn to eat with the “girls.”

But around that same time, I noticed some strange things happening.

One day while feeding our cats, I saw a smear of blood on the cement by the food bowl.  And a few days later, I noticed that our girls stopped eating and left the barn just minutes after Tom-Tom slipped inside.

Something was up and suddenly it dawned on me. The tom wasn’t letting my cats eat, and he probably was fighting them for their own food!
Hmmm…maybe making friends with the tom wasn’t such a good idea after all.

I felt a little foolish then, trying to befriend a cat that may have been hurting my own.

The crazy thought of setting up a “surveillance camera” crossed my mind, but I think my clues were enough to go by.

My girls were going to be fed elsewhere.
Relationships, like the one I tried to build with that cat, can be misleading can’t they?

Starting out cautious and checking for negative signs along the way can save us a whole host of trouble. Because sometimes it’s not just cats, it’s people who aren’t always who they seem to be.

When I was a girl, I watched way too much TV. My brother and I would sit for hours on end soaking in our favorite sitcoms and cartoons.

I remember enjoying countless episodes of one particular Looney Tunes show starring Ralph E. Wolf and Sam Sheep Dog. You see, Ralph E. was determined to get himself a sheep and he would try every trick in the book to get a taste of mutton.

Sometimes, he would zipper himself in a sheep’s costume and settle in with the flock ready to make his move.

Sam Sheep Dog was somehow always on to him though, and more often than not, Ralph E. went away hungry with a big bump on his head.
Those were cute cartoons, but do you know that similar things happen to us every day when people pretend to be someone they are not?

Now, most likely we won’t get “eaten up” on the outside, but broken relationships can tear us up inside.

When we don’t use discernment, we can end up hurt by a relationship or, as Jesus warns us in Matthew 7:15, led astray by a false teacher:
“Watch out for false prophets. They come to you in sheep’s clothing, but inwardly they are ferocious wolves.”

In Bible times, prophets told what was to come, but they also were teachers who had influence over the people that “sat at their feet” and learned from them. You can probably guess what happened when they filled their listener’s heads with lies.

When my kids were small, I decided to enroll in a correspondence writing class through the Writer’s Digest School.

In the “class,” I was to be paired up with a published author, and coached on writing the theme, outline and first few chapters of my own book. I was excited to receive information on my new teacher, but when the letter came, I wasn’t so sure about her.

You see, the teacher ended up being a writer of horror fiction novels.  Her letter to me was kind and encouraging, but I couldn’t get past the fact that what she produced was something that probably didn’t please God.

Before making a decision to move on, I decided to call a former journalism professor of mine and get his input. After telling him the whole story, he advised me to be cautious. He said that whenever you allow someone to speak into your life and teach you, you need to be wary of the perspective they are coming from.

Since we already knew what kind of “fruit” the woman produced, I needed to be careful not to fall into a trap.

Needless to say, I called Writer’s Digest and switched my instructor. False teachers and false friends can make us wish we’d paid more attention to the warning signs don’t they?

Well, it’s taken a few days, but I think our feline “wolf in sheep’s clothing” has decided to hightail it out of here and eat at his own house.

Good thing too, because it saved me the trouble of giving Sam Sheep Dog a call.

Dear friends, do not believe every spirit, but test the spirits to see whether they are from God, because many false prophets have gone out into the world.

I urge you, brothers and sisters, to watch out for those who cause divisions and put obstacles in your way that are contrary to the teaching you have learned. Keep away from them.

Make no friendship with an angry man; and with a furious man thou shalt not go:  Lest thou learn his ways, and get a snare to thy soul.