Got a Leaky Pipe? 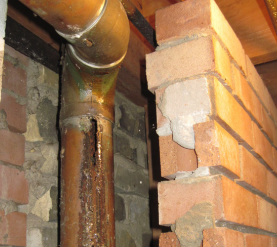 There was a puddle on our basement floor that just wouldn’t go away.

For weeks we let it lay there, not knowing its source. But the mystery was beginning to get to us.

We knew we had to call a plumber, but the busyness of life kept it on the back burner...

There came a day, however, when the water began to seep into the bricks around our basement fireplace, and we knew we had a problem. The plumber came quickly then, and I knew it was going to be a big deal when he called me down to the basement saying, “I want you to see this…”

When I got downstairs, he pointed to a large piece of copper piping that had been hidden safely behind the brickwork of the fireplace. Now exposed, I could see an oblong hole about three inches in length on the pipe that had water and sewage oozing out its side. Yuck.

The plumber said it was the worst hole he’d seen in a long time and explained that it got that way because it had been slowly growing where no one could see it.

I remember seeing a sign once that said, “When we give Satan an inch, he becomes our ruler.” And this is so true. Often, we like to keep our sins hidden, tucked neatly away from others and, so we think, away from the searching eye of God.

These “hidden” sins are the worst I think.

We pretend that we’re the only ones who know they exist, and often we participate in them secretly. After all, we’re not hurting anybody right?

But just think about my copper piping. Its hole started small where nobody could see it didn’t it? Probably years ago, safely hidden behind the brick, it began to wear thin. Constant dripping from a leaky toilet began to work on it until it grew so big, it couldn’t remain a secret anymore. The evidence was all over our floor.

The Bible is clear on hidden sin. Moses spoke about it in Numbers 32:23. He was giving the Israelites some instructions from God and, knowing their tendency to drift from the rules, he said this: “But if you fail to do this, you will be sinning against the Lord; and you may be sure that your sin will find you out.”

Have you got a leaky pipe? We’ve all heard the stories about others who do.

I remember hearing about a man who was the pastor of a large, vibrant church in the Virginia Beach area where we used to live. I was surprised to hear one day that the man suddenly stepped down from his position. Later, I read in the paper that the pastor had been involved in an affair and well, I guess his sin was finally finding him out.

The pastor was successful and obviously good at his job. But there was that hidden sin and when it was found out, it caused his whole world to come tumbling down on him.

Now was just the pastor affected by his sin? No. His wife, his family, friends and a huge congregation shared in the pain. When we hide our sin, we cut ourselves off from the help of others and most especially, from the powerful hand of God.

I had a Christian friend who once confessed her smoking habit to me. She was the leader of a large woman’s ministry, and she had a hidden sin that was damaging her body. She needed help. I felt privileged to be able to pray for her.

Sins can seem big and they can seem small. But you know, they’re all the same to God in the sense that they all separate us from him.

The Bible says that we all fall short of the glory of God. We all are sinners, saved only through the grace that our loving father offers.

So, if you discover a puddle growing on the basement floor of your soul today. Do yourself a favor, make a quick call to the God who can fix all things. He makes all things new – even you!

​Here are some Bible verses that'll help you on your journey:

And this is the message I proclaim—that the day is coming when God, through Christ Jesus, will judge everyone’s secret life.

Our iniquities, our secret heart and its sins [which we would so like to conceal even from ourselves], You have set in the [revealing] light of Your countenance.

If we confess our sins, he is faithful and just and will forgive us our sins and purify us from all unrighteousness.