Where Your Treasure Is ...
A Christian blog post on priorities 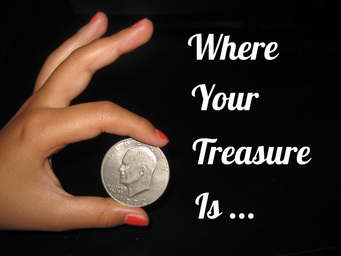 By Debra Torres
The muffled calls of the auctioneer echoed through the wood and on over to my house.

I could just barely make out some of the words: “Five dollars here, do I hear twenty-five?”

And on it went throughout that sunny Saturday morning.

A neighbor had passed away a few months before and this was her final event. It gave her the uncanny opportunity to appropriate her funds even after her passing.

I hadn’t known the woman and was embarrassed to find out months after her death that she was even gone. Sadly, I learned from a friend that the woman was most likely not a Christian when she died.

Maybe that’s what made the auctioneer’s call eerie to me as I wondered about my neighbor’s life.

Later, as I pulled out of my driveway to a street lined with cars, I saw people leaving the auction with boxes filled with her stuff.
It’s amazing to think that we pass on from this world the same way we come into it – carrying nothing.

Things that we have collected, our trinkets and our treasures will all go to either a relative, a friend, or a complete stranger with the highest bid on the auction block.

I think about this sometimes when I find myself clinging to the things of this world.

I mean, what do I want to be known for?

Someone who hoarded her things or someone who freely gave?

My grandfather had a difficult time giving when he entered his final years. He and my grandmother had to move from their home to an assisted living facility when my grandmother’s Alzheimer’s became too difficult to handle.

Their house, an old brick beauty nestled in the hills of Pittsburgh, had been theirs for 50 years. And to me, well it was a treasure trove of memories.

The house stood empty for a good while, and I think the rest of us would have cherished some reminders of the special memories we had shared there.

But something always held my grandfather back from letting them go.

I remember visiting him at “the house” one day with my dad. I had a small camera with me, and I was determined to take photos of all of the special “memory” spots that I held dear.

There was the ivy covered brick out front, the old kitchen clock, the old fashioned thermometer outside the small black screen and even the bathroom switch plate with their last name initial in the top right corner.
As I made my way snapping shots through the house, a shelf of knickknacks in the guest bedroom caught my eye.

I had memorized every item on that shelf throughout my childhood and it struck me then that I’d like to have one for a keepsake.

My eyes landed on the smiling ceramic bride and groom set, but when I asked my grandfather for them he abruptly said, “No.”

My grandfather passed a few years after that, and I have no idea where that little bride and groom ended up.

Giving can be hard sometimes. I know that.

And I think for my grandfather, it may have symbolized a change in life that he wasn’t ready for -- a season when things were coming to an end.

I think we all struggle with this a bit when we give something we treasure away. It can be a painful reminder of our mortality.

A few years back, I read my daughter a book about a rabbit who found a large coin under his pillow after losing a tooth. The size of the coin reminded me of a silver dollar that someone gave me when I was a little girl. It was something that I treasured.

And when my daughter lost her own tooth not long after that, I thought of that silver dollar. I could put it under her pillow, I thought, and it would make a great memory for her. But I couldn’t give it away could I? It was my treasure after all.

Passing along that silver dollar was a hard thing for me to do.  But when I did, I experienced  a new, special feeling that comes in giving something you really care about.

And now, the treasure is hers.
Here are some Bible verses that'll help you on your journey:

Give generously to them and do so without a grudging heart; then because of this the Lord your God will bless you in all your work and in everything you put your hand to.

There is one who scatters, yet increases more;
And there is one who withholds more than is right,
But it leads to poverty.
The generous soul will be made rich,
And he who waters will also be watered himself.

Give, and it will be given to you: good measure, pressed down, shaken together, and running over will be put into your bosom. For with the same measure that you use, it will be measured back to you.”