What's in a Name?
-- a Christian Devotional on experiencing God. 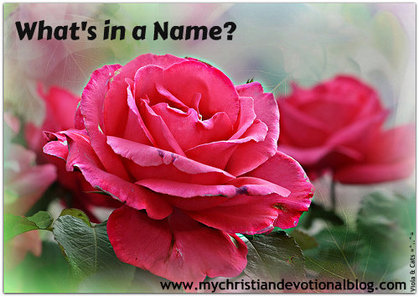 By Debra Torres
It was 11th grade chemistry class and Mr. Reber was in his glory. He loved trying to relate atoms, elements and the periodic table to a bunch of teens who longed to be anywhere else but in his classroom.

I remember one of his lectures going something like this:

“Now memorizing the names of the elements is very important,” he was saying. “The names identify them, they tell us what they are.”

“It’s sort of like hearing your own name spoken,” Mr. Reber said, getting that wistful look in his eye. “You hear it, and you pay attention. And there is nothing like it because it’s who you are. Take my name for example, ‘Melvin.’ Hear that? It sounds sweet to my ears: Mel-vin.”
I have to admit, learning chemistry under the tutelage of Mr. Reber had its high points. And I think his dramatization of name memorization was one of them. I’m not sure his theatrics helped me any with my grade, but it definitely made things a little more interesting.

It’s true what he said isn’t it? We do like to hear our names spoken.

And, I’ve found that when someone calls me by my full name, “Debra,” rather than my nickname, “Debbie,” I tend to stand up a little straighter and take even more notice.
One way to tell if your name is important to you is to see how you react when someone gets it wrong. Do you keep letting them say it incorrectly? Of course not.

Personally, I find that I get kind of offended when this happens.

I remember when the wife of an old friend called me “Donna.”  What!?

Before I knew it, I was on the defense. How could she get my name wrong? My husband had known her husband for years. Was I that forgettable to her?

Ahh… all that over just a silly name mix up.

But you see what I mean.

Recently, I just started reading the book “Experiencing God” by Henry T. Blackaby and Claude V. King. The book talks about how we as Christians can “live the full adventure of knowing and doing the will of God.”
I like what I’m reading so far and was touched the other day when the authors began describing the many names of God. You see, they said that throughout the Bible, followers of God came up with new names for him as they went through different experiences with him.

They write: “Frequently when God revealed Himself to a person, that person gave God a new name or described Him in a new way. For the Hebrew, a person’s name represented his character or described his nature. This is why we frequently see new names or titles used for God following an event where a Bible character experienced God. To know God by name required a personal experience of His presence.”

You all probably know the story of Abraham and his son Isaac. God put Abraham through a mighty test when he told him to sacrifice is beloved son to him.

When they were on their journey, the boy Isaac asked his father where the animal was for the sacrifice and Abraham, by faith, told him that God would provide it.

And, as you may know, God did provide. He directed Abraham to use a ram caught in a thicket to use for the sacrifice instead of his son.

Through his experience, Abraham discovered a new name for God: “The Lord will Provide” (Gen. 22:14).

The book also recounts the story of Moses who, while overseeing the battle between the Israelites and the Amalekites, found that when he raised his hands the Israelites would gain ground, but when he let his hands down, they would lose.

After the battle was over and the Israelites were victorious, Moses set up an altar and proclaimed a new name: “The Lord is my banner” (Exod. 17:15) which means the Lord went before them, representing them.

Looking back on my own life I see now that I can also use different names for God based on my own experiences:

To help, here is an excerpt from the Names, Titles and Descriptions of God given in “Experiencing God”: