What Are You Putting Off?
A Christian blog post on procrastination 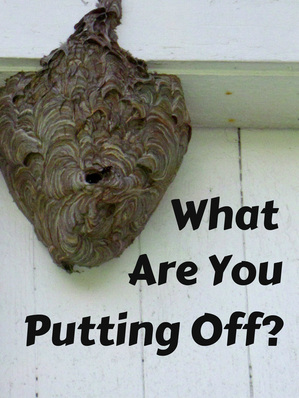 By Debra Torres
The wasp’s nest outside our hayloft started out small.

I noticed it a few weeks ago and pointed it out to my husband.

But as you know, life moves fast. And just this morning, I looked up to a nest that was now nearly the size of a basketball.

Those wasps had been busy!

I bought some wasp and hornet spray, and my husband went out to do the dirty work.

Parking myself at a safe distance, I decided to watch the event.

My husband would have to go up to the second level of our old horse barn, crack open the hayloft door and aim the spray at the outside upper corner. It was nearly dusk, so we figured there would be less activity in the hive.

Boy, were we wrong!

The minute my husband cracked the door, a swarm of angry wasps emerged.

“Watch out. They came out!” I yelled, afraid he would poke his arm out with all of those wasps buzzing around.

But I shouldn’t have worried, because he never opened the door.

A few seconds later, my husband came out of the barn and rubbed the back of his head. An angry wasp had come through a crack in one of the windows and found him.

Ouch!
I’m sure that things would have been way easier had we got our game on when the nest was small.

Do you ever put things off?

I don’t think we’re the only ones who ignored a little problem until it grew to a size way harder to handle.

Procrastination can be a major pitfall can’t it?

It’s hard enough when we put off things
like wasp’s nests, but consequences can grow even more severe when it comes to dealing with problems with people and I think most especially … kids.

Old Eli must have thought that he was an okay enough dad. After all, he was a high priest and judge of Israel. Surely God would give him a break when it came to his disobedient and disrespectful sons right? I mean he was busy doing the work of the Lord after all.

But some of you may know how that story goes.

God didn’t think it was okay that Eli’s sons were wicked. And the bad boys, namely Hophni and Phinehas, weren’t little by the time their deeds are mentioned in the Bible. They were grown men who were actually serving as priests like their dad.

The commentary in my Life Application Bible says this about the dastardly duo: “But Eli’s sons took advantage of their position to satisfy their lust for power, possessions, and control. Their contempt and arrogance toward both people and worship undermined the integrity of the whole priesthood.”

I’m guessing that Eli must have procrastinated in the areas of correction and discipline when the boys were little. It was no secret to him what his sons were doing.

As my commentary reads, “Eli knew that his sons were evil, but he did little to correct or stop them, even when the integrity of God’s sanctuary was threatened.”
As parents and grandparents, we have the responsibility on our shoulders to instruct and correct the children in our lives.

When we procrastinate -- well now, we can have a big problem on our hands. Just like our old wasp’s nest.

Procrastination plagues all of us at one time or another, and although it may not seem like such a big deal when we’re doing it, we can actually miss a blessing when we indulge in it.
Joanne Farro in her blog post “Putting off Procrastination” over at www.jesusfreakhideout.com says this, “While procrastination robs us of blessings, God promises us great rewards for practicing diligence.

"Often when we pray and ask the Lord for the desires of our hearts, He will expect us to play a part in the process. Whether the work involved is challenging and exciting, or mundane and monotonous, if we approach our tasks with a conscientious attitude, we will find great reward and satisfaction as a result.”

Taking care of a problem or a project today can put us ahead of the game. So let’s enjoy life – and not put it off!

Now, to those wasps…

He also who is slack in his work
Is brother to him who destroys.

He who observes the wind [and waits for all conditions to be favorable] will not sow, and he who regards the clouds will not reap.

I made haste, and delayed not to keep thy commandments.