What's the Truth about Lying? -- and why is it so bad?
By Debra Torres 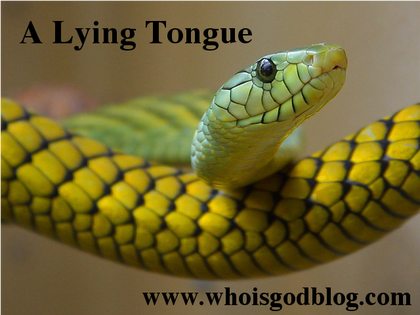 It wasn’t hers, so what would she have to do with it?

Again and again she denied that she took it, but when we challenged her to open her square, metal lunchbox,


I’m sure we probably gasped at what was inside.

It was 1973 and I was in second grade. And even though I was only 7, I can still see the tormented look on Claudia’s face when her peers caught her in the act.

A lying tongue cuts both ways.

In my devotions this morning, I read that we are responsible to teach our children about lying and why it is wrong. And it also said that we should use God’s Word to do it.

This challenged me to do a little digging, because you know what? As parents and grandparents, I think we often do a disservice to the young ones who are watching us. Can you guess what it is?

We Lie.
Pam’s little girl jumped into her lap when she was over my house a while ago. And when she asked her mother for another sweet, I was surprised at Pam’s answer.

“There are no more,” Pam gently told her little one before letting her go off to play.

I was a bit shocked at Pam’s answer because you know what? Pam and I both knew that there were more sweets.

Now, I’m not blaming Pam. Sometimes it’s easier to lie to our kids than tell the truth isn’t it? There’s a whole lot less fuss and who needs to go through all the drama, when a simple white lie with do the trick.

Why is lying bad anyway? Oh, we all probably know that staying away from deep, dark lies is a good idea. But what about the little ones that keep us out of trouble and help our day run more smoothly?

One summer, when I was in college, I worked at a Salvation Army kids camp as a dining room supervisor. Under me, I had a small staff of teenage girls, many who probably hadn’t worked a day in their lives.

One particular girl, Michelle, was lazy, undependable and usually late. But when Michelle’s parents stopped by one evening to see how she was doing, I had a hard time dishing out the truth.

Instead I lied to them about her performance and told them what they wanted to hear.

It was a big, fat lie that helped my day go a little smoother and made Michelle’s parents feel good about their daughter.

But you know, as I think about that lie, I realize that I did an incredible disservice to that family by not telling the truth.

And, most importantly, what did I teach Michelle?
Since then, I’ve shaped up quite a bit when it comes to lying. More and more I find that I don’t want anything to get in the way of my relationship with God. And I know that dishing out lies can distance me from him.

Plus, if we don’t follow a strict standard when it comes to lying, how can we expect our children to do the same?

In the book, “The Power of a Praying Parent,” I enjoyed reading about how the author, Stormie Omartian, dealt with her son after he told a whopper concerning a certain baseball and a broken window:

“We had a long talk about what the Word of God says about lying. ‘Satan is a liar,’ I told him. ‘All the evil he does begins with a lie. People who lie believe that lying will make things better for them.

“But actually, it does just the opposite. That’s because telling a lie means you have aligned yourself with Satan. Every time you lie you give Satan a piece of your heart. The more lies you tell, the more you give place in your heart to Satan’s lying spirit, until eventually you can’t stop yourself from lying.’”
Wow. I’d say that made things pretty clear didn’t it? And it certainly makes me want to stay on the straight and narrow as well!

Who wants to give Satan that kind of edge?

In my Bible reading today, I came across King David in the Psalms and he was struggling to find someone in his life who was not a liar. Everyone in his circles seemed to have an ulterior motive and lied to get what they wanted.

There was one, however who never strayed from the Truth and David hits the nail on the head when he says: “And the words of the Lord are flawless, like silver refined in a furnace of clay, purified seven times” (Psalm 12: 6).

Here are some Bible verses that'll help you on your journey:
Proverbs 21:6 English Standard Version

6 The getting of treasures by a lying tongue
is a fleeting vapor and a snare of death.

5 A false witness will not go unpunished,
And he who speaks lies will not escape.

22 Lying lips are an abomination to the Lord,
but those who act faithfully are his delight.