The Singing Religion: Music in the Church
The Christian Blog that gets you thinking ... 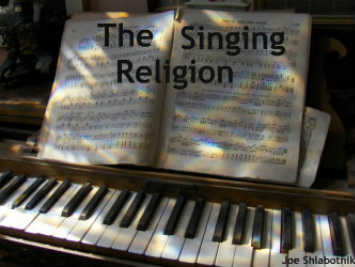 By Debra Torres
As I make my way through my mid 40s, I’m starting to come to terms with the things I just can’t seem to do well.

For instance: I can’t make a good campfire that lasts after the newspaper goes up in flames.

I can’t make a tasty pancake that doesn’t resemble a hockey puck.


And I definitely can’t sing.

Now I’m not bashing myself, I know that there are certain talents and gifts that God has given me that I can do well. I’m just being honest here, and if I could change one thing -- I’d like to make beautiful melody with my voice.

But you know, even though singing isn’t one of my talents, I do enjoy listening to it and participating in it (to the best of my ability) in and outside of church.

I particularly love Christian contemporary music, and I listen almost exclusively to it. I love that the words in a song can take my spirit to new heights with God.

Maybe that’s why my ears perked up last Sunday when I found out that our pastor was going to speak on music in worship.

And it was interesting when our pastor called Christianity a “singing religion."
“Singing unto God is something that is peculiar to the worship of the God of the Bible,” he said. “Christianity and Judaism are singing religions, atheism is songless -- there is nothing to sing about.”

Wow. Isn’t it interesting that God enjoys music too?

Sounds like we’ve got the whole choir and band going now, right?

And, although worship is directed to God, it tends to minister to us participants too doesn’t it? It’s like giving God a gift, and he turns around and gives it right back.

Often, even as a listener, it carries a powerful message that tends to elevate my mood and make a gray day seem bright.

I remember once feeling lonely and a bit cast off when my college roommate announced her wedding plans shortly after we graduated. Although I was glad for her, my heart hurt for my own situation. I went through a break up just a month before graduation and to me, well, my situation looked pretty bleak.

I was trying to learn the piano back then and for some reason that night I opened to the hymn “Great is Thy Faithfulness.”

As I plunked out the melody, God sweetly ministered to me through the words of that song. In it was a promise I could stand on, and I knew it.  That next year, I met the man I was supposed to marry, and this month we celebrate 20 years.

I’ll never forget that God used a song to give me peace during that troubling time.
In church on Sunday, our pastor said that often godly music has the ability to minister to hearts.

“Music has even been known to transform the soul of the singer and listener alike allowing the awe, reverence and worship of God to bubble up into 'springs of praise' where drought did once abound.”

He then shared a true story about an unbelieving man who was determined to end his life.
The man had picked out the destination for his demise and was home writing his goodbye letter when he switched on the radio.

The song playing was a Christian one, and it spoke volumes of God’s love into his spirit. The man had a radical change of plans after hearing the song and went on to live a productive life.

“If it had been a preacher,” the man later said, “I would have turned him off – but that song – it broke me.”

As I listened to the songbirds making melody in my backyard the other day, I realized that they were having a holy “jam session” singing to their creator.

The next time I was out, I decided to join them. Just me, God and the birds.

Although I may have been a little off key, I don’t think God minded.

And the birds, well, they were probably thinking that it was about time.

2 Samuel 22:50 New International Version
Therefore I will praise you, LORD, among the nations;
I will sing the praises of your name.

Hebrews 2:12 New Living Translation
For he said to God,
“I will proclaim your name to my brothers and sisters.
I will praise you among your assembled people.”

James 5:13 Amplified Bible
Is anyone among you afflicted (ill-treated, suffering evil)? He should pray. Is anyone glad at heart? He should sing praise [to God].