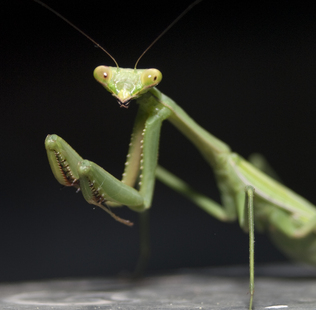 By Debra Torres
Our freezer has been filled with bugs for weeks.
Small bugs, fat bugs, long bugs and short bugs.

Each has been meeting their frosty demise in the freezer drawers, racks and even ice cube bucket of my side-by-side refrigerator.

My son’s science project has taken over!

“It takes two days to freeze a bug, Mom,” he told me when I tried to take one of the little creature’s containers out a little early to make room for something edible.
“If you take it out now, it will come back to life.”  I didn’t really believe him until a stink bug pulled out of the deep freeze a little early came up missing the next morning.
The project, which consists of catching, freezing and pinning 20 different bugs from 10 different orders, has been a bit stressful on my son to say the least—especially now when we’ve got just a few days left until it’s due and not all of the “orders” have been found.

Yesterday, he anxiously informed me that he still needed a dragonfly, a lacewing something or other, or a cockroach.

And to my relief, he told me he didn’t think he could find a cockroach in our house.

The dragonfly got me thinking, however.  I remembered this past summer when one of those huge insects got stuck in our sunroom. I never got it out, and I thought that maybe it had died up in our shades.

Today, I asked my husband to pull them down, and with some effort, and I hope not permanent damage, he got two down—but the dragonfly was nowhere in sight.

Earlier today, my son was getting discouraged.  Determined to catch bugs, he was outside for quite a while before I came out to check on him.  “I’ve prayed a hundred times, mom,” he said.  “I still can’t find anything.”  I remember thinking that I needed to keep my mouth shut and let God do the teaching.

We looked in the raspberry patch and at the apple tree.  I stayed hopeful that somewhere we’d see a stick move and there we’d have our walkingstick.

Later, after learning that our sunroom shades were officially stuck in somewhat of a down position, I decided to do a little searching on my own for that dragonfly.

Maybe it didn’t get stuck in the shades; maybe it landed in a corner or in the potted plant.  I checked some random areas and then came to the baseboard heater.  Peering in on one side, I saw a dead moth and on the other was my dragonfly!  It was a little baked, but otherwise was in perfect condition.

I was so excited as I called for my son. And later, as we both watched my husband fish the bug out of the heater, I knew we had witnessed a miracle.

You know it wasn’t so much about the bug as it was about the answer to prayer that my son got to experience.  I don’t believe in “chance” or even “luck.”  That was some God-ordained bug finding!!!

In 1 Peter 5:7, we read, “Give all your worries and cares to God, for he cares about you.” That makes him all the more personal, don’t you think?  That dragonfly may be just a bug—but it was a big deal to my son and me.

This was a miracle done by a God so big that He chose to help us with our little bug project.

My son’s got just one more “order” to catch and then he’s on his way to an “A” on the project.  He needs to find a live walkingstick, a live praying mantis, or a silverfish.  We’ll be searching the trees tomorrow or we’ll be up in the attic looking for silverfish.

But wherever we end up, you’ve gotta know that like the mantis—we’ll be praying!