One Lost Sock - a Christian Devotional 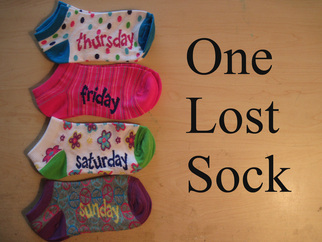 By Debra Torres
I knew the socks were going to be trouble the moment they caught my daughter’s eye.

Their trendy designs were bright and flashy and best of all, they had the days of the week written on all seven pairs.

“You’re going to lose one and then the whole pair is shot,” I said shaking my head no.

You see, when we started our large family I was told by a smart grandma that plain white socks were best. That way if you lost one, you could easily join it with another and no one would be the wiser.

But the puppy dog eyes came next and, although I usually don’t give in to them, I thought about my daughter’s childhood and how fleeting it already was. Days of the week socks would be fun right? Something she could store in her memory and think back on as a special part of being a girl.

So we bought the socks, and she gave me the “I can’t believe you said yes” look and thanked me.

The socks were cute, I have to admit. Monday’s was covered with little hearts and Tuesday’s was rainbow striped, but Wednesday’s was … LOST!

Ugh! It’s so amazing how a girl’s lost sock can suddenly become a parent’s problem.

“I have to find it mom, I’m not going to school without it,” she said sitting on my bed with one sock on and one sock off.

“Explain that one to the truant officer,” I quipped. But I took her pain seriously and went on an all out search for that one lost sock.
_ Under the couch cushions I found some loose change but no lost sock so I grabbed my flash light and began the dirty work of searching under things.

The Wednesday sock nestled under the couch among dust bunnies and a stray Cheerio. I was so glad to find it.
Although the lost sock was a bit of an irritant (and I’m sure it won’t be the last one that goes missing), I have to admit that I love to find things.

I remember once when my boys were little and we lost the library book, “Sharks, Sharks, Sharks!” It bugged me to no end that I couldn’t find it.

My young men must have enjoyed watching their mother celebrating because I got a request to reenact the scene so they could see the jumping again!

If I love to find things so much, I just wonder how God feels when a lost soul is “found.”

In the Bible it says that the angels in heaven rejoice when a sinner repents. Can you just see the party?

_ In church on Sunday our pastor had an altar call and, from my seat in the back I saw some serious praying going on up at the front of the church.

Not too much later, our pastor’s face was filled with joy as he introduced to us a beaming man that was our “new brother in the Lord.”

Lately, God has been teaching me on how short life really is. The Bible says that it is “but a breath.”

I’m learning how to appreciate the slow draw each breath now – instead of panting them in and out. Because, well, we aren’t guaranteed tomorrow are we?

Sometimes I think the lost “put off” being found because they feel they have a limitless amount of tomorrows. But anybody who reads the paper or watches the news knows that isn’t true. Any day could be our last couldn’t it?

When I was a teenager I worked at McDonald’s with a grill guy named Chris. A few of us were Christians there including some of the managers. They would crank the Christian music up as we closed for the night, and I think Chris thought we all were a bit crazy.

I asked him once whether he had considered the Christian faith. And, I can still see him looking at me from behind the grill saying: “No, not at this point, I’m not ready for that yet.” I think Chris felt he still had a good bit of partying to do.

That was thirty years ago, and I wonder if Chris is still living and most of all, I wonder if he was ever found.

Life is short and sometimes fleeting. There’s really only one guarantee for tomorrow and that’s when we’ve received our ticket to eternity through the saving power of Jesus Christ.

Are you lost today?

Behold, You have made my days as [short as] handbreadths, and my lifetime is as nothing in Your sight. Truly every man at his best is merely a breath! Selah [pause, and think calmly of that]!

Yet you do not know what your life will be like tomorrow. You are just a vapor that appears for a little while and then vanishes away.

For the Son of Man came to seek and to save the lost.”