What is Heaven Like?
Discovering that you're not home yet can change your life.
By Debra Torres 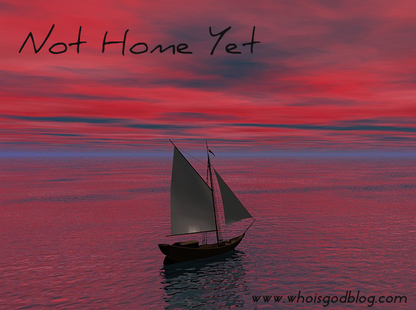 The soft, pitiful cries of the homesick boy reached my ears and resonated with my heart. “I miss my fam-i-ly!” he cried over and over again.

The boy had been staying with us for the weekend and even though his parents were due back the next day, it wasn’t enough.

He longed for the completeness and security of what was home to him.

Deep within his small frame was a pain that was real and heart wrenching.

And as I lay in bed later thinking about it, a memory came flashing back of a little curly haired girl, homesick at a Girl Scout sleepover.

We were in a large gym and many of that day’s events had come to an end. My friends and I had laid out our sleeping bags in a neat row.

And, although I was having fun, I remember being washed with a sudden feeling of  fear and homesickness. My mom was a Girl Scout leader and had been late arriving at the event.  My friends grew concerned about me and I’m sure I shed a tear or two.
It’s a horrible feeling to be homesick isn’t it? Some of us rarely leave our homes for any great length of time now, so we may forget. But we’ve all probably got a childhood memory or two when we were overcome by it.

You know, as much as we consider this earth and our present surroundings home, every now and then it’s good to step back and remind ourselves that, if we’re Christians we haven’t arrived at our true home yet.

If you’re like me, you probably like to get all settled in your life’s routine and pretend that life is going to go on like this forever.

But just a quick pager turn over to the obituaries in the newspaper reminds us that it just isn’t so. Your friends and family sometimes show up there. And people you’ve known your whole lives have moved on to somewhere else.
Don Piper, in his book “90 Minutes in Heaven,” tells of the glimpse of heaven he experienced after he had been pronounced dead at the scene of a horrific accident.

Piper says this about his heaven experience: “When I died, I didn't flow through a long, dark tunnel. I had no sense of fading away or coming back. I never felt my body being transported into the light. I heard no voices calling to me or anything else. A light enveloped me, with a brilliance beyond earthly comprehension.

“In my next moment of awareness, I was standing in heaven.

Joy pulsated through me as I looked around, and at that moment I became aware of a large crowd of people. They stood in front of a brilliant, ornate gate. I have no idea how far away they were; such things as distance didn't matter.

“As the crowd rushed toward me, I didn't see Jesus, but I did see people I had known. As they surged toward me, I knew instantly that all of them had died during my lifetime. Their presence seemed absolutely natural.

“They rushed toward me, and every person was smiling, shouting, and praising God. Although no one said so, intuitively I knew they were my celestial welcoming committee. It was as if they had all gathered just outside heaven's gate, waiting for me.”

I read Piper’s book quite a few years ago, and I think I’ll always remember certain scenes like the one above that Piper describes. But there was something he said about his experience that particularly struck me. He said he didn’t even think about or miss his life here on earth. Not even the love ones he had left behind.

In other words … he wasn’t “homesick”!

I parked my car in a rural area the other day and took a few minutes to spend some time with God. The sun was shining and the sky was blue.  And in my view was a grassy hill and an explosion of fall leaves. It was beautiful.

But slowly I began to get an “otherworldly feeling” of a different home, a heavenly sense that something else was waiting for me.

The view that day was nice, but no – I’m not home yet.

And neither are you.

Building 429 "Where I Belong"
Here are some Bible verses that'll help you on your journey:
John 14:2 New International Version
2 My Father’s house has many rooms; if that were not so, would I have told you that I am going there to prepare a place for you?

Revelation 21:4 Revised Standard Version
4 he will wipe away every tear from their eyes, and death shall be no more, neither shall there be mourning nor crying nor pain any more, for the former things have passed away.”

Revelation 21:10-14 Revised Standard Version
10 And in the Spirit he carried me away to a great, high mountain, and showed me the holy city Jerusalem coming down out of heaven from God, 11 having the glory of God, its radiance like a most rare jewel, like a jasper, clear as crystal. 12 It had a great, high wall, with twelve gates, and at the gates twelve angels, and on the gates the names of the twelve tribes of the sons of Israel were inscribed; 13 on the east three gates, on the north three gates, on the south three gates, and on the west three gates. 14 And the wall of the city had twelve foundations, and on them the twelve names of the twelve apostles of the Lamb.