Idol Worship
CAUTION: It can creep up where you least expect it.
By Debra Torres 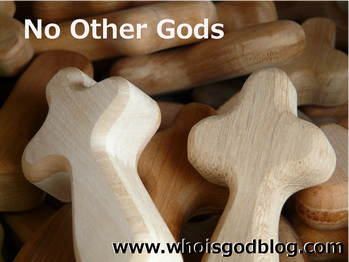 I could feel the little silver cross hanging from my neck as I drove my kids up North to see some relatives last week.

I loved my little cross and I had just started wearing it regularly. To me, it represented my faith and touching it there from time to time reminded me of it and brought me comfort.

But as we drove down the road, a speaker came on the Christian radio station that challenged me to be careful of my perspective of my necklace, or any other material representation of God for that matter.
​

Now I know that sounds kind of weird. It’s just a cross and it means something powerful right?

But what I learned from Chip Ingram of the Living on the Edge radio broadcast ministry is that Christians today need to be just as careful to worship nothing else but God as the Israelites in Old Testament times.
Ingram started out his message describing a recent trip to India where he saw people bowing down and worshiping a huge bronze statue.

He was struck by the offense this was to God, but later God revealed to him that he had created idols in his mind that were just as offensive.

Ingram referred to Exodus 20:4b: “No manmade likenesses -- images that are real or imagined -- pictorial representatives of God are to be used as a means of worshiping the living God.”

And he pointed out that this scripture goes beyond the bronze and clay statues used in idol worship, “The point is exactly the same as with the idols but it broadens the scope from statues only to any real, perceived or imagined pictorial representation of God. Don’t use even false mental pictures to worship God. Don’t make an idol and don’t make a likeness.”

Why shouldn’t we use any kind of object to represent God? -- because it reduces him, Ingram says.

The Israelites had been sitting at the bottom of Mount Sinai for a good long time. Where was Moses anyway? Maybe he was dead. Or, maybe God decided he had other plans for him. Who knows what the Israelites were thinking, really. But we do know that their patience was running thin.

Moses had gone up to the mountain to get God’s laws written in stone. He had been gone for nearly 40 days now.

To them, the one who would lead them to the Promised Land was not coming back. So they decided to do something about it.

And in Exodus 32:1 we find out just what they did: “When the people saw how long it was taking Moses to come back down the mountain, they gathered around Aaron. ‘Come on,” they said, “make us some gods who can lead us. We don’t know what happened to this fellow Moses, who brought us here from the land of Egypt.’”

Whenever I read about the golden calf that was made at the bottom of Mount Sinai, I’m always a bit horrified. How could the Israelites do this after all that God had done for them?

And Moses’ own brother Aaron created the idol. What were they thinking?!

But reading more into this story, I can understand the Israelites a little better and can see now how easily we can slip into the same mindset.

Who doesn’t want a god they can see and touch and remind them of their faith?

The commentary in my Life Application Bible says this:  “No doubt the Israelites, fresh from Egypt, found it quite natural to make a gold calf to represent the God that had just delivered them from their oppressors.

"They were weary of a god without a face.

" … They may even have thought they were worshiping god. Their apparent sincerity was not substitute for obedience or excuse for disobedience. “

They were just trying to put a face on their invisible god by creating a golden calf.  But can you see what was wrong that? God clearly had told them not to do it.

In his radio broadcast, Ingram speaks about different types idols – imagined ones that we sometimes use to represent God. He talks about church, religious pictures and he even talks about the cross
Let me tell you first something your probably already know. None of these things are bad or wrong. It’s just that we need to be careful not to place them as idols in our minds.

Why? Because in doing so, we’re reducing God into something we can feel, touch and see. Just like the golden calf.

And God is so much more.
Here are some Bible verses that'll help you on your journey:
Exodus 20:5 New Living Translation

5 You must not bow down to them or worship them, for I, the Lord your God, am a jealous God who will not tolerate your affection for any other gods. I lay the sins of the parents upon their children; the entire family is affected—even children in the third and fourth generations of those who reject me.

23 Yet a time is coming and has now come when the true worshipers will worship the Father in the Spirit and in truth, for they are the kind of worshipers the Father seeks.