Do You Believe in Miracles?
A Christian blog post on healing prayer 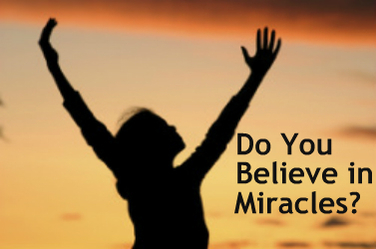 By Debra Torres
It was our own fault that we entered the small church a little late.

And it was our tardiness that gave our large family the “honor” of sliding into the church’s first and second rows.

It was a good thing though, because it forced my teen boys to focus – they couldn’t have missed the sermon even if they had wanted to.

And looking back, I’m glad my family had front row seating that day because something happened in that service that my kids will never forget.

We were visiting a friend’s church in Virginia, and he had invited a special speaker that day to talk about miracles. The speaker, a young man named Nick Thornhill, was there with some of his friends to share with us about how we could experience and participate in the healing power of God.
Nick, dressed in blue jeans and sandals and talking in a Southern accent about his surfing background – had no problem attracting the attention of my young men sitting in the front row.

But I’d say that when he gave his testimony and shared his experiences in the miracles of healing, he captivated the attention of the whole lot of us.

Basically, Nick’s message was that he was an ordinary guy who God was using to do extraordinary things.

And, he was quick to point out that Jesus called all of us to do his work – even when it came to miracles of healing.

There are no religious superstars here, Nick said, and God’s healing power could flow through anyone.

When Nick asked if anyone had experienced a miracle, I sadly realized that I couldn’t raise my hand. But, when he asked if anyone wanted to be part of praying for one, well, my hand bolted up – I knew that was something I wanted to do. So, I moved up front with the handful of people who had the same desire as me.

A doctor in the congregation calling herself a “skeptic” got to pray for the first miracle.

A man in the congregation had one leg at least one half inch shorter than the other and had experienced back pain as a result.

The doctor confirmed that the man’s legs were uneven and prayed a simple prayer of faith. Front and center, my teen boys watched as that man’s left leg grew out to match the length of the right.

Others were prayed for and healed that day and when Nick called out if anyone else needed prayer, I thought of my son’s shoulder. He had been to the sport’s doctor several times over the ache that was inhibiting his pitching arm. My son is a talented and focused pitcher, but when his shoulder hurts, it’s game over for him.
Now he sat in the “hot seat” for healing prayer.

After another simple prayer for healing came for him from a man in the congregation, Nick asked my son how his shoulder felt.

He moved it around some and said that it felt the same, that it only hurt him when he pitched.

“Well, get outside and pitch then!” said Nick, encouraging my husband to get a ball and glove out of the car.

My son came in later smiling.

“There was no pain. And I didn’t even warm up.” he said, telling us that his shoulder felt warm and tingly inside.

Now I know that the idea of seeing miracles today may be a little foreign to you. I also understand there are probably plenty of scams out there that may have turned you off to them.

But if you believe the Bible is true, then I would encourage you to meditate on some of the scriptures below and start praying. You can catch Nick’s sermon about using the miracle of healing to minister to unbelievers at by clicking here.

After telling our miracle story to a Christian friend the other day, there was an uncomfortable silence that followed. Not sharing my joy, my friend told me that she sided with the skeptics when it comes to things like this. And I knew our conversation was over.

I was saddened by her response and realized that my friend, in her unbelief, was putting a limit on the things that God could do in her life. Somehow, I don’t believe God gives us more than we are willing to receive.

And how about you?

Do you believe in miracles?

I assure you, most solemnly I tell you, if anyone steadfastly believes in Me, he will himself be able to do the things that I do; and he will do even greater things than these, because I go to the Father.

And my message and my preaching were very plain. Rather than using clever and persuasive speeches, I relied only on the power of the Holy Spirit. I did this so you would trust not in human wisdom but in the power of God.

Mark 16:17-18 English Standard Version
And these signs will accompany those who believe … they will lay their hands on the sick, and they will recover.”