Leaking Jesus:
Quietly Doing "out of the box" things for God. 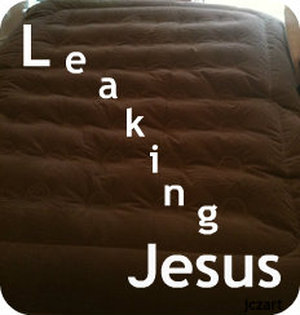 By Debra Torres
The air mattress my daughter slept on was slowly sinking.

We were sleeping at a relative’s house, and my husband felt she was big enough now to forgo the playpen that I had brought.

“She’ll have more room to move,” he had said, blowing it up just for her.

But he was sound asleep when I began to notice the mattress getting mushy.

My daughter was asleep on it – right next to our high double bed, and I didn’t like the feeling of her sinking throughout the night. So I set pillows up alongside our bed so she wouldn’t roll off into the abyss underneath.


​But that must not have done the trick because I woke to a little moan and jumping up, I rescued her from where she had rolled.
Needless to say, that old leak had me assembling the playpen by the dim of the nightlight in the wee hours of the morning.

Air mattress leaks can be a pain can’t they?

They’re hard to spot at first, but just a tiny hole can make a huge difference between a good night’s sleep and waking up on the floor with a stiff back.

There are all kinds of leaks I guess.

Some can be deadly like a gas leak on an old stove, an undetected carbon monoxide leak in a home and even an information leak in time of war.
But there also can be good kinds of leaks that are just as small and silent, but reap in some pretty great things.

Recently I read a story in Charles Stanley’s In Touch devotional called:
“Be Secretly Incredible: Success according to a guy named Bob.”

The story talked about a man named Bob Goff who was committed to going against the roaring
tide of self promotion in the world.

And, as silently as possible, he did “out of the box” things for God.

The article goes like this: “And what if, instead of telling everyone about the important things we’re doing all the time, we just did things, and were just secretly incredible?

"According to Goff, the ultimate purpose is to ‘leak Jesus’ – and to do it without getting caught up in receiving the credit or wondering who noticed. ‘He’s the one really making things happen, anyway.’”
The article on Goff struck me because of the whimsical nature of the man who does great things for God –quietly. Goff, who puts only his name and the word: “helper” on his business card is actually an attorney, the head of a law firm, a law professor, a diplomat in Africa and founder of an organization that combats human trafficking and other worldwide injustices.

So many times we do things so we’ll get a big foam finger with the words “Way to go!” pointed at us.

My mom was a great encourager. Her words: “Good job, Deb”and “I have confidence in you” still ring in my ears.
It was good to grow up with a cheerleader like my mom, but I think that people like me can easily fall into the trap of seeking approval from others for the things we do.

I love what Goff says about this: “When we get our security from Christ, we no longer have to look for it in the world. … So many people want to cut a deal and convert people (to their way of thinking).

"But I learned that we’re the ones who need to be converted into being better friends, who have no angle on anything we do, other than just love people more and ‘leak’ Jesus. Because you leak what you love.”

Do you know anyone who “leaks Jesus”?

Often I find myself “sniffing out” these types of folks. They’re the ones seeking fellowship, spending time in God’s word and then bringing all that good stuff into their day to day – often escaping the limelight of publicity.

I remember when I was part of the Mothers of Preschoolers ministry (MOPS) when my kids were young. I don’t know what I said or did that was so special, but I had another mother who I barely knew approach me and tell me that she wanted to spend time with me.

She told me that there was something about me that was different and that she wanted it for herself.

I smiled at the compliment, but it wasn’t me she was after was it?

There wasn’t anything that I had to offer her in and of myself, and I needed to give credit where credit was due.

Got a leak?
Here are some Bible verses that'll help you on your journey:

For we are to God the pleasing aroma of Christ among those
who are being saved and those who are perishing.

“Watch out! Don’t do your good deeds publicly, to be admired by others, for you will
lose the reward from your Father in heaven. When you give to someone in need,
don’t do as the hypocrites do—blowing trumpets in the synagogues and streets to
call attention to their acts of charity! I tell you the truth, they have
received all the reward they will ever get.

But when you give to someone in need, don’t let your left hand know what your right
hand is doing. Give your gifts in private, and your Father, who sees everything,
will reward you.