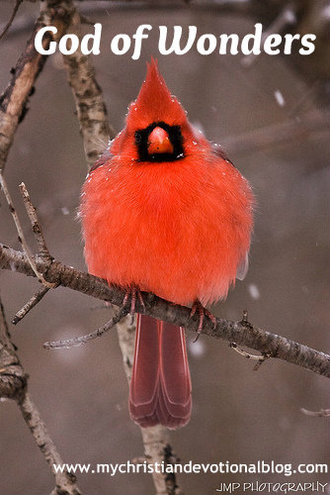 By Debra Torres
The little white-bellied junco that perched atop my bird feeding pole was grateful, I’ll bet, for a place to feed on the frosty winter day.

His friends, the loud and obtrusive blue jay and the shy, red cardinal also make their visits, reminding me that there’s still such thing as color in the white of winter.

The pole, a Christmas present to me, sits outside my study window and is a pleasant diversion.

It invites me to peek up from my writing and watch a whole new community at work.

Researching the jay’s calls on the internet, I find that there are four of them and they each have a distinct sound.

There’s the squeaky gate, the bell call, the hawk alarm, and the jay-jay-jert.


​Now, maybe you’re not the “bird nerd” that I am. (My daughter lovingly coined that term for me the other day.)

But you have to admit that there’s a certain wonder in even the tiniest creatures of nature.
The contemporary praise song “God of Wonders” written by Steve Hindalong and Marc Byrd talks about creation and our majestic God with lyrics like:

“Lord of all creation
Of water, earth, and sky
The heavens are Your tabernacle
Glory to the Lord on High

We sang this in church on Sunday and after it our pastor switched things up a little bit and took down the microphone. He asked us to give simple testimonials about how we see God’s majesty in the world today.

With interest, I listened to each person’s observations and was intrigued to discover that many of the testimonials were intimately connected to the life and calling of each person who spoke.

For example, an astronomy professor in our congregation shared his observations about the awesome wonder of the night sky and a woman in the medical profession shared how she was struck by the intricacies of the human body and how it all works together.

A man who works with wildlife spoke about nature and how even rattlesnakes can be a beautiful evidence of God’s creation.

As for me, being a mother of five, I am always in awe of the gestation process of new life. So, when it was my turn for the microphone, I shared about an experience I had with a Jehovah’s Witness woman one day.
I had recently had a new baby when the woman came to my door trying to explain her view of God and the Bible.

I listened for a bit, but then shared with her my belief in the Trinity.

I knew that this is one of the many points where her beliefs didn’t line up with Christianity.

She tried her hand on “reasoning” with me asking me to explain how God could be in heaven when he walked the earth as Jesus and so on.

And you know what? All I could think of was my God of Wonders. The one who formed my baby daughter’s little curly ear inside my womb. I couldn’t comprehend it, but I didn’t have to. And I told her that.

The God who formed the blue jay’s call in his throat, the mohawk crest on the cardinal and the little red spot on male downy woodpecker’s head doesn’t need to answer to my limited understanding of him.

You know what? I don’t think that “reason” is even in God’s vocabulary.

A few weeks ago, I watched Fox News’ Shawn Hannity interview American Atheists’ president David Silverman. Among other things, Hannity questioned Silverman on his view of the intricacies of creation. The atheist’s response was that man just hasn’t learned enough yet to explain it all.

What do you think – will we ever be able explain it all?

A plump dove stares at me from my birdfeeder pole as I write this. I see her little eyes blink and her feathers fluff out helping to insulate her from the cold.

Wonder if she’s got me all figured out.

11 The heavens are Yours, the earth also is Yours; the world and all that is in it, You have founded them.

11 Thine, O Lord is the greatness, and the power, and the glory, and the victory, and the majesty: for all that is in the heaven and in the earth is thine; thine is the kingdom, O Lord, and thou art exalted as head above all.