Need to "Do" for Salvation?
Nope. Discover the finished work of the cross 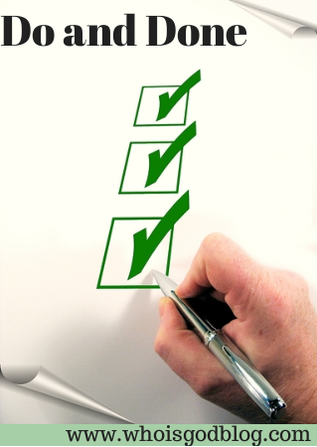 By Debra Torres
I have a friend who has worked hard for her salvation. Her commitment to her religion is admirable.

She strictly adheres to its teachings, rarely misses a meeting and has regimentally shared her beliefs with countless others.

If she works hard enough, my friend thinks that she may just get to spend eternity in bliss. She’s got a great track record of service and that most likely will make her a “shoo-in” right?

Strangely enough the words of the Bible would disagree. You see God has flipped things around for us when it comes to salvation.

We can’t earn it. It’s a free gift offered to all of us, and the only part we play in the process is simply receiving it.

I understand how people like my friend can fall into this trap. I mean most things in life work the opposite way don’t they? We’ve been taught since we were little that the rewards of hard work are great. And many of us drive ourselves into the ground simply trying to measure up.

So you see why the free gift of salvation can be a difficult thing for many of us to wrap our heads around. It’s almost like there is something inside of us that feels like we need to pay God back for what he’s done. I wonder though, if a bit if this has anything to do with pride.
We all have that relative or friend who won’t take our help. No matter how great their need, your offerings of financial assistance more often than not get turned down.

I remember watching an exchange between two people over a few twenty dollar bills. One wanted to pay for dinner and the other wouldn’t accept the gift. Those bills made there way on and off the counter quite a few times, until things got a little embarrassing and uncomfortable about it all.

I’m not even sure who won out, but in the end, the twenty dollar bills became something distasteful in both people’s eyes.

Maybe that’s why God chose to offer his free gift without giving us any say in the matter.

Scriptures say: Ephesians 2:8, “For it is by grace you have been saved, through faith—and this is not from yourselves, it is the gift of God—.”

But we all know that we’re still tempted to get caught up in a “works” mentality when it comes right down to it, aren’t we?

I know a person who took up so many positions in their church that when they left, close to half of the ministries there were suddenly vacant. Sometimes as Christians I think we feel like we have to “do” in order to please God in our attempt to pay God back for the work he did for us on the cross.

Easily we let guilt drive us when making decisions to do things for him.

A few years ago, I had attended a church for just a short while when a well-meaning member asked if I would be willing to help out in their children’s ministry.

I’m sure she couldn’t have missed the “deer in the headlights” look I must have flashed her.

Ugh! For this sometimes worn-out mother of five, children’s ministry was one of the last places I wanted to be at that time.

But how could I say no? Feelings of obligation washed over me. When someone asked you to do something for the church, you pretty much had to right?

You know my thinking was wrong there, but I’m guessing you understand how I felt.

In my “TableTalk” devotional from Ligonier Ministries, Rev. Albert N. Martin, talks about the difference between “do” and “done” religions.  “… it is vital for us to understand at the beginning that all the religious systems in the world can be reduced to one of two descriptions.

And, if it’s been “done” and we’ve received it, then God has left us nothing more to “do” on the matter.

What a relief. Thank you Jesus for the finished work of the cross.

Here are some Bible verses that'll help you on your journey:
Acts 15:11 Living Bible

11 Don’t you believe that all are saved the same way, by the free gift of the Lord Jesus?”

24 [All] are justified and made upright and in right standing with God, freely and gratuitously by His grace (His unmerited favor and mercy), through the redemption which is [provided] in Christ Jesus,

16 It does not, therefore, depend on human desire or effort, but on God’s mercy.