Do You Believe in Bigfoot? 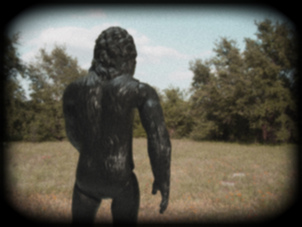 By Debra Torres
The teen boys gathered around the old man as he prepared to spin his yarn.

A request from one of the boys had started it really.

It was a request for a story – the man’s story about a hunting trip, a dark night and a terrible scream.

“A sound like none other,” the man said wide-eyed … remembering.

The boys listened, enraptured by the tale and its teller. This Bigfoot story was perhaps better than any they’d heard on TV – after all they had a witness before them right there in the flesh.

When the story was over, a bold boy, the one who had asked the man for the tale, declared his own faith in the unknown.
“I believe in Bigfoot,” he said, “and I believe in yeti, and I also believe in the chupacabra.”

A thought, quick as lightening, ran across my mind as I sat close by watching the scene play out before me, “Ah, but do you believe in Jesus?”

That’s the question that really matters the most isn’t it? It’s the only ticket that, according to the Bible, can carry us from here to eternity.

I remember when my 5th grade Social Studies teacher, Mr. Walzer, taught us the differences between tangible and intangible things. Tangible things you can touch. The intangible you cannot.

“Take love, for instance,” Mr. Walzer would say, “you can’t go out and buy a loaf of love can you?” Nope. Mr. Walzer was right, and the same goes for belief I guess. You can’t touch it or buy it – but you know when it’s there and when it isn’t.

I remember my grandfather’s skeptic expression when I told him that I knew I was going to heaven when I died.

From the look on his face, I could tell what he was thinking - how could anyone possibly know  they’re going to heaven, what if they’re not good enough, or they’ve messed up somewhere along the way?

I suppose he might have also felt that I was acting pretty presumptuous to judge for myself that I was good enough to “get in.” But you know, I’m not good enough and I never will be. But being “good enough” is not the ticket – belief in Jesus is.

One of the scriptures you probably learned in Sunday school or seen waived around in the stands of a football game, backs me up. John 3:16 says, "For God so loved the world that he gave his one and only Son, that whoever believes in him shall not perish but have eternal life.”

Okay, let’s evaluate this scripture and see what you've got to do to be saved. Do you need to teach a lifetime of Sunday school? Gotta knock on dozens of doors telling people the Good News?  How about attending Bible studies 24/7?

Those things aren’t bad, and if God calls you to them – great. But salvation is a free gift given to those who believe.

When an unbeliever is near death, I often think of the thief on the cross. Do you remember him? There were two thieves on either side of Jesus at his crucifixion. One mocked him and the other believed. Jesus said to the believing one, “I tell you the truth, today you will be with me in paradise” (Luke 23:43b).

The thief didn’t earn his salvation, none of us do. After we are saved, however, good works do follow, often because we want to grow in Christ and please the one who gives us life.

And as for Bigfoot? I think only God knows the answer to that one. And as for me, well, I always love a good story.

Ephesians 2:8 (New Living Translation)
God saved you by his grace when you believed. And you can’t take credit for this; it is a gift from God.

1 John 5:4-5 (The Message)
Every God-begotten person conquers the world's ways. The conquering power that brings the world to its knees is our faith. The person who wins out over the world's ways is simply the one who believes Jesus is the Son of God.