Evangelism - How to Be Contagious 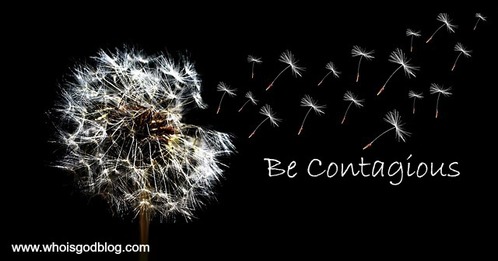 By Debra Torres
The little doctor in his spotless white med coat surprised me with his big personality as he skillfully tended to my daughter’s broken finger.

We had never met this doctor before, and at first impression I quickly judged him to be quiet and soft spoken.

​And when he left to go look at some x-rays I let my eyes survey his examining room.

You can tell a lot about a person by looking at their stuff I think.

And I was surprised when my eyes landed on a neat display of “Our Daily Bread” devotionals on his sink counter.

When the doctor came back in, our talk easily turned to God. While the man diligently worked on my daughter’s hand, he shared his testimony with me and we spoke about church and what it meant to be a contagious Christian.

Churches that are exploding with people have it right, he told me.

It’s all about building relationships. Often in evangelism, he said, we sit across from someone and say, “I’m holy and you’re a sinner.” That’s not the way to bring someone to Christ – it’s by making friends.
I loved listening to that doctor. It was like finding a flourishing spring in the barren wasteland of life. And the fact that I didn’t expect it, made our conversation, well, a little contagious for me.

The doctor said that he had led a class on evangelism a while ago using a book about the contagious Christian. And when I looked it up, I found out that “Becoming a Contagious Christian” by Bill Hybels and Mark Mittelberg was an intriguing faith-sharing tool.

Its purpose is to help Christians take everyday situations with everyday people and use them as evangelism opportunities.

“In their heart of hearts, I think all true followers of Christ long to become contagious Christians,” say the authors. “Though unsure about how to do so or the risks involved, deep down they sense that there isn’t anything as rewarding as opening a person up to God’s love and truth.”
I talked about my conversation with the “contagious” doctor the other day when I was speaking to a few young adults in our college-age Bible study.  I had noticed that one of my young friends had a Bible verse on the back of her cell phone and told her and the others how the “Our Daily Bread” devotionals on the counter had sparked my conversation with the doctor.

“You won’t believe how many people comment on that verse,” my friend said smiling. And she even told me about some others that she wanted to purchase for her cell phone so that she could switch the verses out.

A young man in our group said that he initiated conversations about God by having Bible verses written on the menu board at his restaurant.

“People come in and see that,” he said, “and some of them give me a weird look, but others start a conversation with me about it.” He then told us about an ongoing talk about God he was having with a regular customer because of it.

While shopping the other day, I noticed that the man on the other side of the counter had tattoos everywhere I could see and something in his earlobe that looked painful. And his eyes held a certain nothingness that told me that he had long since given up on getting any joy out of life.

When I looked at him, I thought of my own sons and how I often prayed that someone else besides me would speak the truth of the gospel into their lives.

And so, I decided to be a bit contagious.

Armed with a little gospel tract our pastor had given to us a few Sundays back, I shared it with him.

Probably, it wasn’t the best act of friendship evangelism like spoken about in the “Becoming a Contagious Christian” book, but since my time was limited with the young man, I decided to be the best short-term friend I could be and give him the gospel.

And, whatever Truth I was carrying that day – I pray he’ll catch it!

Are you contagious?
Here are some Bible verses that'll help you on your journey:
Matthew 9:37-38 Living Bible

37 “The harvest is so great, and the workers are so few,” he told his disciples. 38 “So pray to the one in charge of the harvesting, and ask him to recruit more workers for his harvest fields.”

15 He said to them, “Go into all the world and preach the gospel to all creation. 16 Whoever believes and is baptized will be saved, but whoever does not believe will be condemned.

8 But you will receive power when the Holy Spirit has come upon you, and you will be my witnesses in Jerusalem, and in all Judea and Samaria, and to the farthest parts of the earth.