Is It so Bad to Covet?
Why God included it in the Ten Commandments
By Debra Torres 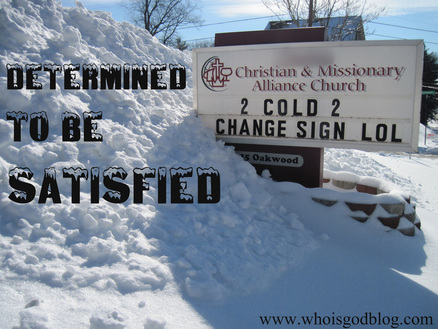 The snow was crisp beneath my boots, and the squeaky sound that came from each footstep told me that it was cold.

I didn’t need the snow to tell me it was cold, though. My body was way ahead of it.


That week, my fingers froze in my mittens, my feet felt the chill right through my boots and even my woolen hat was no match for the bite of the wind.

Sometimes, when the weather gets me down in Western Pa., I begin to think about Virginia Beach and the many years I spent living there. I had enjoyed the South with its two-month winters, its daffodils in February and its endless blue skies.

When God moved our family North over ten years ago, however, I was ready for an adventure.

But I didn’t think about how the change in weather patterns would affect our lives and moods.

It’s been an adjustment to say the least. And, the frigid temperatures we’ve experienced this winter has me longing for the color green … the blue of the ocean wouldn’t be so bad either.
The past few summers I’ve had the opportunity to visit my friends in Virginia Beach, and each time I go, I find myself envying them for their beautiful weather.

The area’s twenty-minute drive to the beach, its pink sunsets and its peaceful residential lakes have me yearning for days gone by.

But lately I’ve been wondering if that’s okay with God. I mean, where do you draw the line between envying and coveting.

Or, is there even one?

A recent article by Don Wilton entitled “Thou Shalt Not Covet” in Decision magazine has a graphic that tells all. In the image there are two houses, one big and mansion like and one small and simple. In front of the two houses are two vehicles. One is a souped up sports car and the other is a beaten down station wagon that looks like the blue bomb I drove around when I was a teenager. If front of the smaller home where the blue bomb is parked, is a man standing in its walk looking longingly at the mansion.

Is it so bad to covet after all? I mean, the man in the image wasn’t hurting anyone or even stealing what didn’t belong to him. He was just simply looking. It can be difficult to see the harm in that unless we look closely at God’s word and see that coveting is listed in his top ten list of “don’ts.”

Honestly, we probably covet without even realizing it. There’s always something nicer to want isn’t there? The latest cell phone, the bigger TV, even the better-behaved child.

You know what I’m talking about.

I remember peeking through a new friend’s open door once and seeing the beautiful furniture in her living room. I coveted. I was envious. And there was no way I was inviting my new friend into my house anytime soon.

But that was the wrong attitude wasn’t it?

Even though coveting is listed as the tenth commandment, it must have been pretty important to God to include it. According to Dictionary.com, “covet” means: “to desire wrongfully, inordinately, or without due regard for the rights of others.”

In his article, Wilton calls coveting a “climactic expression of the Ten Commandments,” saying that sinful man tends to long for things that God has not given him.

He even puts a twist on the concept saying that when we don’t covet, it helps us to have more satisfaction in what God has given us and who he has made us to be.

“This commandment given to Moses on top of Mount Sinai was designed to help us realize just how unique we all are in His eyes,” said Wilton. “In a viciously competitive world, where so many people jostle for position and power, it is so wonderful to remember that God made us unique to His design.

“Is it not too wonderful to know that God loves us just the way we are? His strong command here really ought to encourage every believer.”

Now this doesn’t give us an excuse to not strive for something better in our lives.

Ambition is a good thing, says Wilton who encourages us to “move forward with contented action.”

So maybe someday I’ll get my beach back. But who knows, by then I may have taken up snowboarding.
Here are some Bible verses that'll help you on your journey:
Exodus 20:17 New International Version

15 And He said to them, “Take heed and beware of covetousness, for one’s life does not consist in the abundance of the things he possesses.”