City of Refuge
Dealing with the pain of accidental death 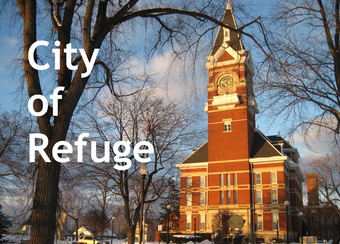 By Debra Torres
Strewn over the top of my friend Melissa’s kitchen table are a dozen or so sympathy cards and notes.

These are just a sampling of all that’s she’s received from friends and even some strangers since her tragic event just over a month ago.

The words of comfort written in each one, the prayers and the scriptures have spoken volumes to Melissa during her low moments, and she finds herself bringing the cards out often.

There’s a card signed by a group of teachers from her local elementary school. Melissa points that one out to me and shows me their kind words.

One card comes from a niece who sends a hug her way.  And another, with pink and blue flowers, has a Bible verse found in Psalm 56:8 that she’s got memorized: “You have collected all my tears in your bottle.”

“I don’t recall ever hearing that verse before,” says Melissa, “but I know it now.”

She’s cried a lot of tears over the past few weeks, and she’s figuring that God’s got a pretty big bottle with her name on it.
_ Melissa stops at the card with a soft, furry kitten on the front and tells me that she comes back to this one the most.

It contains a carefully written letter by a pastor’s wife.

With solid assurance, the pastor’s wife tells my friend that the man she mistakenly hit with her SUV last month went straight to heaven.

It was dark that night and Melissa had been driving her daughter and a friend home after a fun time at the movies.
There was laughter in the car as they navigated the country road.

Bridging a knoll, Melissa was horrified to see a man in her path. There was no time to skid, no time to swerve, no time to react before her SUV made contact.

Raymond, lover of Jesus, died at the scene.

When an accident happens like this, it’s understandable to think of the grieving family members and friends. Our minds don’t often consider the feelings of the other grieving party – the one who caused the death.

If we do think of them, it may be with scorn and blame – I know I typically do this anyway and maybe you do too.

This is what Melissa expected. In fact I think she pointed the finger of accusation at her own self. But she was shocked to have her community treat her differently. She tells me that she still can’t comprehend how everyone turned their compassion her way.

_ “And it wasn’t like they waited for weeks,” she says. “The next day I had people knocking on my door. The outreach was incredible.”

Melissa says that the prayers of her community rescued her. “It’s like God scooped up our county and held us all up. The prayers of the Christians in this area saved me.”

In book of Deuteronomy, Moses goes over God’s law and principles for godly living with the Israelites just before they enter the Promised Land.

It’s interesting to find that God told the Israelites to set up actual places called “Cities of Refuge” to harbor people like my friend Melissa who caused accidental death. Individuals could run for safety and protection to these cities during tragic times.

It’s nice to know that Melissa didn’t need to run anywhere after her tragic event. Her community understood her pain and provided her with a “city of refuge” right where she lived.

I’m guessing some of you reading this may have experienced an event like Melissa. In fact, she told me that there are over 1,000,000 people who cause an accidental death or injury each year.

I’m sure it’s something you never forget, but as in Melissa’s case, it can be something you learn and grow from. An acquaintance with grief can help us to help others through their own pain.

Just the other day, Melissa took the opportunity to comfort someone who was struggling with his own grief.

She says that the “old Melissa” would have never done this. “I used what people did for me and gave it to someone else. Maybe this is where God is going to send me next. … If I can just pass on a little bit of what people have given me through this time -- this would be the greatest gift I can give.”

On behalf of my good friend Melissa, I would like to publically thank all of those who have showed her love and compassion during this tragedy. You have deeply exemplified God’s love to her and because of this, she is allowing her Father to touch her and grow her in ways above and beyond herself.
Here are some Bible verses that'll help you on your journey:

All praise to God, the Father of our Lord Jesus Christ. God is our merciful Father and the source of all comfort. He comforts us in all our troubles so that we can comfort others. When they are troubled, we will be able to give them the same comfort God has given us.

Cast your burden on the Lord,
And He shall sustain you;
He shall never permit the righteous to be moved.

The LORD is close to the brokenhearted
and saves those who are crushed in spirit.