What to do when Criticized --
-- a Christian Devotional on learning from criticism.
By Debra Torres 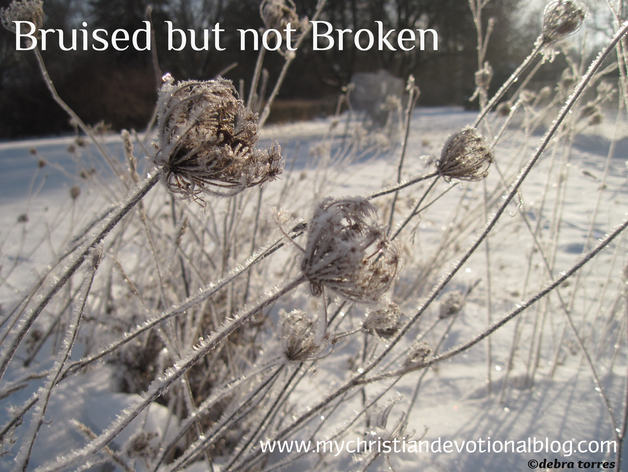 The email came as a surprise and after reading it, I felt like I had been punched in the gut.

A woman who had been receiving email updates from my Christian Devotional blog had decided to unsubscribe and her reason left me deflated.

Ouch. It was a blow, and it took me a few days to recover. My mind filled with questions like: Why even try? Is this how all my readers feel? How could I not see how awful I am?

Criticism is tough isn’t it? And learning how to receive it the right way can be even more difficult.

Our minds can go in a million different directions and in our wrestling thoughts, we often come face to face with feelings like hopelessness, self-doubt and despair.

And they’re often dished out by the one who hates us the most, “the accuser of the brethren” – Satan himself.
Now, I’m not saying that criticism is from the devil, I think he just likes to feast on the vulnerability it can bring.

And one area he likes to attack us in is our identity.

You see if our identity is wrapped up in what we “do” rather than who we “are,” we can easily be beat up when we’re called out on something.

Who are you anyway?

I’ve got a great list from Neil Anderson’s book “The Bondage Breaker” (see ad below) that clearly defines who the Bible says we are. Taking the concepts from scripture, Anderson encourages us to believe things like: “I am God’s child” (John 1:12), “I am Christ’s friend” (John 15:15), and “I am complete in Christ” (Colossians 2:10).

So now you know that you’re pretty special right? Believing these truths about who we are in Christ can take some of the sting out of criticism.

And even though it may be hard to hear this, criticism is not all bad. Sometimes we can gauge its value depending on the way it was delivered and its actual intent.

Recently though, I was thumbing through the late D. James Kennedy’s book “Delighting God” and was surprised to find a chapter that was totally dedicated to receiving and giving criticism.

The things I read in there spoke straight to my heart and gave me a renewed understanding of the thing I so often like to avoid.

“…I would like to suggest that when criticism comes your way,” wrote Kennedy, “try to make lemonade out of the lemons. Benefit from your critics. Let your critics be the unpaid watchers after your soul, the beneficiaries of your career. Let them help you along the way.”

I know that when we are criticized, sometimes our first reaction is to lash out. Kennedy suggests a different approach: “An early edition of ‘The Sunday School Times’ made the following suggestion: ‘Commit the matter instantly to God, asking him to remove all resentment or counter-criticism on our part, and to teach us any needed lesson.’ Some people invariably respond to criticism with counter-criticism, losing all possible advantage from it. They’ve never learned how to make lemonade from lemons.”

A friend of mine called me in tears the other day after receiving an unexpected call from her boss. She was being let go and with that news, he had given her a healthy dose of criticism for her efforts.

Now, my friend felt that her boss’s remarks were unfair and inaccurate but her hands were tied and she was left to face the horrible feelings that come with criticism.

We all know what my friend needs, right? She needs a clear understanding of her identity in Christ -- something that never changes. And also she needs to be open to learn from the situation.

Criticism happens. It just does. A wise friend once told me that if I didn’t ever want to be criticized then I shouldn’t ever do anything.

Not a very attractive option is it?

About a week after I was criticized for my writing, I received this email from a new subscriber:

I have been blessed by your articles in the (newspaper) and now that I can also get your blog, I am twice blessed. … It is my prayer that you will be truly blessed by our Lord as you continue your ministry in His name.

Ahh … I think I’ll go make myself some lemonade.
Here are some Bible verses that'll help you on your journey:

18 If you ignore criticism, you will end in poverty and disgrace;
if you accept correction, you will be honored.

10 Then I heard a loud voice shouting across the heavens,

“It has come at last--
salvation and power
and the Kingdom of our God,
and the authority of his Christ.
For the accuser of our brothers and sisters
has been thrown down to earth--
the one who accuses them
before our God day and night.

13 Brothers, I do not consider myself yet to have taken hold of it. But one thing I do: Forgetting what is behind and straining toward what is ahead, 14 I press on toward the goal to win the prize for which God has called me heavenward in Christ Jesus.