The Fragrance of Christ:
How does it influence the people in our lives? 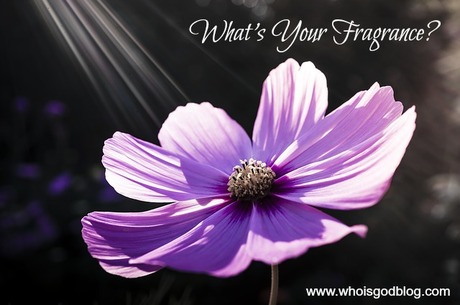 By Debra Torres
The smell of bacon makes me think of my grandmother. And I told my daughter this while making lunch the other day.

I explained that Grandma would often have it frying on the mornings we visited when I was a girl.

Bacon and eggs, hot buttered toast, juice and sweet red grapes was her signature breakfast for our family.

“I think they ought to put those kinds of smells in scented candles,” my daughter said. “They always have sweet smells like cinnamon bun or hot apple pie. How about a bacon candle or a friend chicken one to remind people of their grandmother’s kitchens?”

Her idea made me smile. She just may be onto something, I thought.

I’ve been thinking a lot about how we make others feel lately.  Just like the way the smell of bacon frying connects me with memories of my Grandma, how do the words we say and the things we do influence the people around us?

Dr. Elvera Berry, my college communication professor, had a phrase she liked to say that’s stuck with me all these years: “You cannot not communicate.”

What she meant was that everything about us says something to others whether it’s communicated verbally or nonverbally.
For the past few months, my family and I have been on an “X Factor kick.” X Factor is a TV music competition show that features new voice talent. Through a sometimes grueling process, vocalists are eliminated or “put through” to final rounds where eventually a winning act is chosen for the season.

It’s fun to pick favorites on the show and root for them when they perform.

But last week during the show, I got what some people call a “check from the Holy Spirit.” And I felt that God didn’t want me to keep watching.

That’s ridiculous, I thought. I wanted to see the acts that were coming next. So I disregarded the idea as one of my own.

But you know. The acts that followed did nothing good for my heart.

And for a few days afterward, I felt a lot of negative “yuck” in my spirit in response to what I saw.

You see, the X Factor sometimes puts dancers on the stage with the vocalists and unfortunately the dancers tend to dress and perform suggestively.

Although the dancers didn’t say or sing anything, they clearly communicated a message to viewers that in my opinion was highly inappropriate.

A few years ago, I wrote a post called “What do you smell like?” And in the piece, I spoke about the fragrance of Christ. There’s a scripture in 2 Corinthians 2: 14-16 (see below) that speaks about our responsibilities as Christians to communicate a godly “fragrance” in our being. It’s something that most of us rarely think about, but definitely worth considering.

We’re around people all the time and although we may not be speaking, we can still communicate our faith through our attitudes and actions.

A few days ago, I took my daughter to the dentist for a second go at an extraction. During our first visit, one of the machines was faulty and, after sitting in the office for nearly a half hour, the dentist determined that nothing was going to happen that day. She said that we needed to come back when the machine was fixed.

We left, and a few weeks later returned, only to go through the same process again – with the tooth still stuck.

Ugh! While I sat in the dentist’s office, I began thinking about what I was communicating through my actions. As a mother of child with a twice-failed dental procedure, I could have showed my frustration and left in a bit of a huff.

But I thought about how Jesus would handle the situation.

The problem was no one’s fault and I knew that we just needed to move towards a solution and not let bad attitudes get in the way.

In other words, it was important not to let my fragrance get a little stinky!

A dear friend of mine read a quote last week in church about the godly presence of the late British evangelist, Smith Wigglesworth. He said, “In traveling to a coming meeting, Smith took his seat in a railer. Without the benefit of a spoken word, the man in the opposite seat – a complete stranger – suddenly blurted out, ‘your presence convicts me of my sin!’ Smith proceeded to introduce the man to Christ.”

Wow! Can you imagine that? Dr. Berry was right – we cannot not communicate.

Here are some Bible verses that'll help you on your journey:
2 Corinthians 2:14 Amplified Bible

14 But thanks be to God, Who in Christ always leads us in triumph [as trophies of Christ’s victory] and through us spreads and makes evident the fragrance of the knowledge of God everywhere,

16 To the latter it is an aroma [wafted] from death to death [a fatal odor, the smell of doom]; to the former it is an aroma from life to life [a vital fragrance, living and fresh]. And who is qualified (fit and sufficient) for these things? [Who is able for such a ministry? We?]