It's What You Don't See ...
A Christian devotional on the supernatural 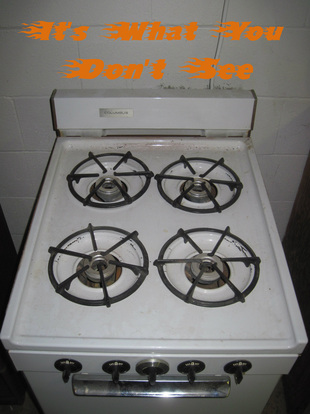 Late Friday night I stuck my head under the flip top of our old gas stove and a surge of panic ran through me.

The pilot lights were out!

Now this was the first gas stove I have ever owned, and I have never used it. Our home’s previous owner tucked it away in our basement and must have kept it for “back up” long ago.

So, I was a bit of a novice when it came to the whole gas thing.

I just knew one thing --

For safety’s sake -- those pilot lights were supposed to be on.


It had been weeks since I checked it and thus my alarm. Hadn’t I heard somewhere that breathing in gas, let alone starting a flame around it could be dangerous?

Hurrying to my computer, I searched the internet for answers and found a host of differing opinions. Some said that it was no big deal and to just relight it, while other warned of gas pockets and explosions.

Oh my!
Despite the late hour, I called several friends who were experienced with gas stoves and filled their ears with my questions and fears.

After our mini-emergency was finally over, and my friends had given me all the helpful advice they could give, I realized that all my fuss had been about something I couldn’t see.

I had gotten all worked up over something that was invisible.

Granted, it did pose somewhat of a danger -- but isn’t it interesting that it was over something I couldn’t see or hear?

I think that the spiritual realm is somewhat like that. It’s invisible, but extremely powerful.

Unfortunately, we often go about our days as if it doesn’t even exist.

I remember seeing a Family Circus cartoon once in the newspaper. Cartoonist Bil Keane had drawn his little boy character kneeling beside his bed praying.

All the boy sees are his pillow and blankets, and he says something like: “I wonder if anyone is even listening.” But Keane gives us an insight into the supernatural by drawing in dozens of angels unseen by the boy who are surrounding him and witnessing the prayer.

Ha! No one is listening, huh?
It’s easy to forget that the spiritual realm exists sometimes isn’t it? I mean, it’s not hard to get caught up in our “day to day.” It’s only real if we can see it or hear it right?

Wrong! If you study the Bible you’ll see the evidence of the supernatural all over it.

In fact many people even had their eyes opened to receive visits from God or his angels.

Just think of the heavenly visitor who was with  Shadrach, Meshach, and Abednego in that fiery furnace (Daniel 3:25) or the angels who visited Lot’s house (Genesis 19:1), Moses’ experience with God at the burning bush, (Exodus 3:2), Jacob’s ladder and the angels walking up and down (Gen. 28:12), Gideon’s visit with the angel at the winepress (Judges 6:11), or Gehazi’s eye-opening experience of angels and chariots (2 Kings 6:16-17).

And I’ve not even started on the New Testament yet!

Todd Bentley in his book, “The Reality of the Supernatural World” quotes Colossians 3: 1 and says this: “God commands you to ‘seek those things which are above where Christ is.’ Where is Christ? In heavenly places. Therefore God is telling us to seek heavenly places. This is a biblical invitation – really, a command – to seek spiritual experiences. This verse also commands us to focus on the things above, not on things of the earth, if you focus on the earth, you can’t enter into the things of the Spirit.”

Although the Apostle Paul, in context here, is addressing religious traditions and whether they benefit us in growing in Christ and in experiencing God, you could also understand this scripture as Bentley takes it.

In order to be open to the supernatural, we need to be able to understand that there is nothing impossible with God.

Not visitations from angels, not healing, not change of hearts, not even people being raised from the dead.

If we believe that God’s place is just in church waiting in an old dusty pew for our weekly visit, I think we’ve got it all wrong. Trusting only in what we see can limit us.

And their eyes were opened, and they knew him; and he vanished out of their sight.
And they said one to another, Was not our heart burning within us, while he spake to us in the way, while he opened to us the scriptures?

As he neared Damascus on his journey, suddenly a light from heaven flashed around him. He fell to the ground and heard a voice say to him, “Saul, Saul, why do you persecute me?”

“I am Jesus, whom you are persecuting,” he replied. “Now get up and go into the city, and you will be told what you must do.”

When Elisha reached the house, there was the boy lying dead on his couch.  He went in, shut the door on the two of them and prayed to the Lord. Then he got on the bed and lay on the boy, mouth to mouth, eyes to eyes, hands to hands. As he stretched himself out on him, the boy’s body grew warm. Elisha turned away and walked back and forth in the room and then got on the bed and stretched out on him once more. The boy sneezed seven times and opened his eyes.