It's All Good
The Christian Blog that gets you thinking... 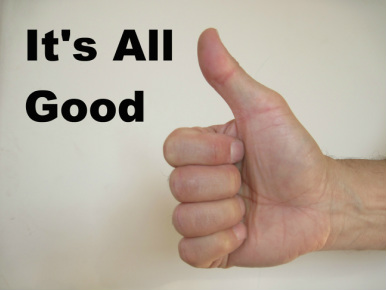 I was talking to the receptionist at the doctor’s office the other day when a country sign behind the desk caught my eye.

“It’s All Good,” it read, and it made me feel warm inside.

When I asked the receptionist about it, she smiled and told me the story.

“Oh, that’s what our doctor always says. And last year, at the craft festival, one of our staff found it and knew she had to buy it for our office.”

I liked that, a doctor with an “It’s All Good” motto. That should keep things cheery around the office right? I’ve heard other people use this phrase when they're talking about the trials of life. It kind of adds a positive spin on things and always lifts me up a bit.

I have to admit though, when I thought about the doctor I had some doubts creep in. I mean he of all people should know that things aren’t always “all good.” A doctor especially would see more than his/her fair share of bad things like sickness, disease and even death.
Anyone really, living on this earth knows that there are plenty of times when life is anything but all good.

You might catch wind of them on the news, in your local paper, or they may be showing up right in your own home.

_ I remember once dealing with the pain of a broken relationship. My heart hurt like it never had before. What I had felt was the direction, the focus and the purpose of my life was suddenly severed, and I lived in a state of wounded shock for quite some time.

A friend and her mom took me to the mall one day, and I remember looking around in their Christian bookstore. It was there that I came face to face with a little plaque that boasted a scripture that I would later learn to live by. It said: “And we know that in all things God works for the good of those who love him, who have been called according to his purpose” (Romans 8:28).

I was fairly new in my walk with Christ back then and didn’t know a lot of scriptures by heart- but this one stuck with me, and it gave me hope.

What was God telling me? You already know right? He was saying, “It’s All Good.”
_ I’m not saying that the pain doesn’t hurt and that the question “why” isn’t still there, but  it’s a submission thing I guess.

Trusting God for what he says in his word can mean the difference of living through hurt in victory or in defeat.

At our Christian college, we were required to attend chapel three times a week.
During these times we’d sing some hymns and choruses and get some solid biblical teaching. I remember one speaker in particular who shared the story behind the old hymn: “It is Well with My Soul.”

Its writer, Horatio Spafford, was a well-to-do Chicago lawyer in the 1800s. He and his wife planned a family ocean voyage to Europe and, at the last minute, he had to stay behind to take care of some business. Tragically, the boat his family travelled on suffered a collision and all of Spafford’s four daughters were killed. He received a telegraph from his wife that said: “Saved alone.”

The story goes on to say that during his voyage to reach his mourning wife, Spafford wrote the words to the well-known hymn, “It is Well with My Soul,”  that has gone on to be a source of comfort to many:  “When peace, like a river, attendeth my way, When sorrows like sea billows roll; Whatever my lot, Thou has taught me to say, It is well, it is well, with my soul.”

The hymn, like the Romans 8:28 scripture reminds us that during seasons of pain and suffering, trusting that God is somehow working things out for our good is crucial to our healing.

That day at the doctor’s office, I busily scratched out a portion of this blog while waiting for my own doctor to see me. When he came in, I explained that I was writing about their sign. He nodded while I explained my blog to him in light of the scripture and you know what? He got it. The sign, the Scripture, and the message – it was if he had carried that concept with him all along.

God is faithful (reliable, trustworthy, and therefore ever true to His promise, and He can be depended on); by Him you were called into companionship and participation with His Son, Jesus Christ our Lord.

Know therefore that the LORD your God, He is God, the faithful God, who keeps His covenant and His lovingkindness to a thousandth generation with those who love Him and keep His commandments;