Heal Our Land - and the real hope of  Jeremiah 29:11
A Christian devotional on a change of heart 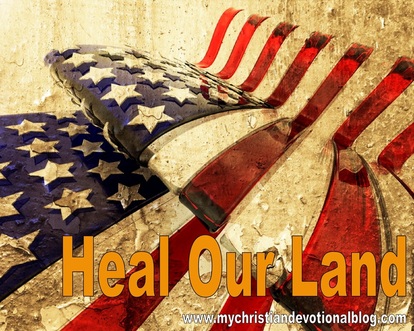 I was hopeful when I went to the polls on November 6.

Proud to be voting, I made my choices and gladly wore my “I voted” sticker with pride.

I had hope in my heart that our nation would see some changes after this election.

I hoped that America would recognize the importance of life and vote in candidates that would help put a stop to the murder of the unborn. The stats were staggering in my Pro-Life Voter Guide – 54 million babies aborted since Roe vs. Wade.

​I had hope that our nation would choose candidates who respected that the God-given mandate for marriage is between one man and one woman.

And, I had hoped that a leader would be voted in who would get America working again. I wanted someone who supported small businesses like my own, and who would do all he could to show Americans that a strong work ethic mattered.

You can imagine the crash I experienced on election night.
But, as I dig myself out of this pit of disbelief, I’m wondering now what to do with myself.

I heard someone say that that they’d like to take a long nap for the next four years and I didn’t blame them one bit.

Sleeping, hibernating or just enduring seems to be an attractive option, right?
But before I set my alarm clock for 2016, I needed to think hard about all that I had hoped for. And maybe, just maybe I was expecting too much.

And to do that, his administration would have had to reach in and heal hearts. And we know that’s something only God can do.

Recently I finished reading through the books of 1&2 Kings in the Old Testament. The books are a sad account of the fall of Israel. After taking so much care to establish a people for himself, God’s heart must have been broken as he watched them rebel, grow wicked and turn to idolatry.

King after king lorded over what became the split nations of Israel and Judah and many led their people farther and farther from the truth.

Sadly, in their line of history, Israel and Judah had only a small handful of kings who chose to follow God’s ways.

Of all of the good kings that ruled the nations in those days, Josiah was my absolute favorite. I love reading how he discovered the book of law and how he reformed the nation of Judah. He renewed the covenant, got rid of the pagan priests, and tore down places of idol worship.

But even the good king Josiah couldn’t change hearts. And soon after he died, his son Jehoahaz was appointed king and he continued in the traditions of evil.

There needed to be a heart change before a nation could change.

Christians who agree with my political views may be asking the same question as I am -- what now? What do we do during the next four years? Our beds are looking comfy right?
Steve Elliott, founder and president of Grassfire Nation, a conservative action network, has a different idea. And in a thought-provoking email sent the day after the election, he said some things that woke me up.

In the email, Elliott reminded me of the days God’s people spent living in Babylonian captivity. And he highlights the message the prophet Jeremiah gave to them – 70 more years of exile. But what Jeremiah said after that was something the people really needed to hear.

He didn’t tell them to hibernate and be unproductive in their misery. Quite the opposite, in fact. He tells God’s people to get busy.

They were to: build houses, plant gardens, marry and have kids, marry off their sons and daughters and have grandkids, and increase in number.

And I especially liked the next part, because here’s where we deal with some hearts: “It gets better,” said Elliott, “Because Jeremiah's letter makes it clear that building and marrying is not enough. People in exile must do something else -- they must be a blessing to the land. …

“So let's review. First, the plan is exile. Second, build. Third, bless. Simple, clear instructions. But why was this important? Why a "plan" for exile with specific instructions on how to act in exile?

“Historians tell us it was during the Babylonian captivity that the Israelites moved from a Temple/Jerusalem focused society to a synagogue and community focused society.

“Simply put ...It was the lessons learned during their time in exile which enabled the Jews to survive 2,500 years in exile. But not just survive -- but to thrive and become the most prosperous, most successful and most innovative people group in the history of civilization.”

Okay, I’m getting up out of bed and the work and prayer begins. I may not like where we are right now, but I know I’m going to like wherever God is taking us.

Glenn Beck reads Elliot's letter on The Blaze Radio Network:
Here are some Bible verses that'll help you on your journey:

4 This is what the Lord Almighty, the God of Israel, says to all those I carried into exile from Jerusalem to Babylon: 5 “Build houses and settle down; plant gardens and eat what they produce.6 Marry and have sons and daughters; find wives for your sons and give your daughters in marriage, so that they too may have sons and daughters. Increase in number there; do not decrease. 7 Also, seek the peace and prosperity of the city to which I have carried you into exile. Pray to the Lord for it, because if it prospers, you too will prosper.”

10 This is what the Lord says: “When seventy years are completed for Babylon, I will come to you and fulfill my good promise to bring you back to this place. 11 For I know the plans I have for you,” declares the Lord, “plans to prosper you and not to harm you, plans to give you hope and a future.12 Then you will call on me and come and pray to me, and I will listen to you. 13 You will seek me and find me when you seek me with all your heart.