Are You Listening?
A Christian Devotional on Hearing God's Voice... 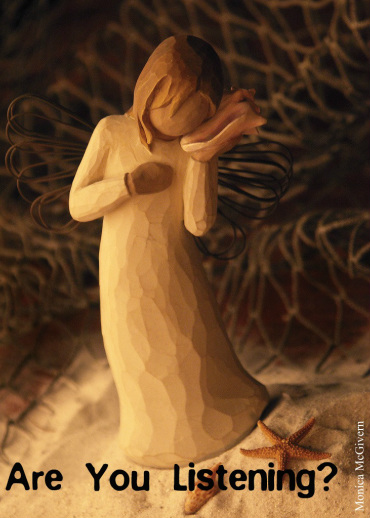 There was a nip in the air that moonlit night when my friend Barbara and her husband set out to explore their new farm.

The property was finally theirs and, too excited to wait for the light of day, they decided to go and check it out.

The old dairy barn they now owned was without electricity, but that didn’t deter them from having a “look” around.

Spreading out their hands in front of them, they felt their way around, taking in the smells of the place.


When Barbara’s hands approached a closed door, she was tempted to pull up the wooden latch and check out what lay on the other side.

A warning flashed inside her then, and instead of going with her first impulse, she decided to move on in a different direction.

The next morning, Barbara went to the barn again – wanting to see it in the light of day. Coming across the door, she decided to open it this time.

Gasping, she quickly realized what would have been her fate had she not listened to the warning she got the night before.

Beyond the door was a stairless drop straight down to the lower levels of the old barn where the previous owner must have thrown hay.
_ It was just a few days ago that Barbara shared this story with me. Besides this one, there were two others that warmed my heart at the goodness of God and the importance of having a listening ear like Barbara’s.

It takes a submissive heart to really listen sometimes doesn’t it?  Pride can easily get in the way, and we can think we know better.

Easily, Barbara could have pushed her warning aside. She could have allowed other thoughts to direct her steps. And … she could have died that night.

Keeping a listening ear open to the voice of God becomes even more crucial as God shapes us into leaders in our homes, our jobs, and our communities. Leading others gives us added responsibility – and if we go astray, some will most likely follow.

As I continue my journey reading through the Old Testament, I sometimes come across stories that I just don’t understand. Recently, I read an account of Aaron and his sons in the book of Leviticus that made my jaw drop.

You see, Aaron and his four sons were consecrated and set apart by God to work in his holy tabernacle. And God gave very specific instructions about how things were to be done in this holy place.

Apparently, two of Aaron’s sons, Nadab and Abihu, chose to do some of the things their own way. And because they didn’t listen to the voice of God, fire came out and consumed them.

_ Wow. When I first read this, I have to admit I was a bit indignant.

How could God destroy these young men because of a simple mistake? But further study showed me that Aaron’s sons willingly chose not to follow God’s rules. Maybe they felt they knew better.

Maybe a shortcut was more appealing.

My Life Application Bible’s commentary says this: “… the point is that Nadab and Abihu abused their office as priests in a flagrant act of disrespect to God, who had just reviewed with them precisely how they were to conduct worship.

"As leaders, they had special responsibility to obey God. In their position, they could easily lead many people astray.”

Listening to God is crucial for the protection of our own lives and for those we lead.

Sometimes God’s voice is powerful and booming like in Psalm 29, other times it’s gentle and quiet like in 1Kings 19 (see below).

Either way, it pays to cultivate a listening ear.

​
Here are some Bible verses that'll help you on your journey: