God Does Not Change, Right?
Why the unchanging nature of God is so important to our faith 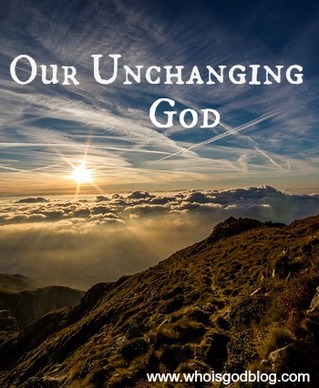 “Do you now how it works?” William the footman asked the butler, Carson, after he came in to shoo them back to work.

“Will you show us?” Daisy, the kitchen maid asked excitedly.

It was the summer of 1914, and the telephone was already in London, so naturally Downton’s owner, the wealthy Earl of Grantham, felt it was necessary

to add this bit of new technology to his house as well.

"But why would we ever want a telephone at Downton, my lord?" Carson asked Lord Grantham when he spoke about having one installed. There was an unmistakable edge of disbelief that resonated in his tone.

As you can probably tell, my family has just been introduced to the British period drama television series, “Downton Abbey,” and we’ve been having fun “catching up” with the world by watching its past seasons.

I’m learning that one of the prevailing themes in the season we are currently watching is “change.”

Taking place at the dawn of WWI, the show reveals the differing perspectives on change through the eyes of both the rich and servant classes living in the Yorkshire country estate, Downton Abbey.

On a larger scale, the characters are impacted by the war and the changes it brings about in their society. And on a lighter side, mixed in are the reactions of the characters as they are slowly introduced to new technology like the telephone, electricity, typewriter and even the curling iron.
Technological advancement and change was clearly evident then and it still is today. When I tell my children that I can remember the days before there were cell phones, microwaves and even hand-held hair dryers, I know I must seem ancient to them, but time does go quickly doesn’t it?

In fact, today we live in such a competitive electronic era where the thrill of having the latest computer, cell phone or tablet is short lived.

Because you know that a better, more advanced model is just around the corner.

Everything and everyone seems to change sooner or later don’t they? But what about God, does he ever change?

A few weeks ago, while studying the book of Samuel, a question came up in my Sunday school class regarding the unchanging nature of God.

Now, I’m no theologian, and I don’t pretend to be one. When it comes to debatable topics like this one, I sit back and listen. I like to leave the conversation to those who have studied the subject more than me.

But I thought it was interesting when a woman named Carole, who would not budge on her stand that God is unchanging, was given the floor last week where she thoroughly presented her case.

Carole tackled tough scriptures like God’s seeming change of mind when he didn’t wipe out the idol-worshiping Israelites after Moses pleaded for their very lives. And she also addressed God’s choice not to destroy Nineveh as he had originally threatened to do.

In her presentation, Carole made her case that God, in his omniscience, knew all along what would happen after Moses and Jonah reacted to his threats.

Things all went according to his perfect plan.

“The scriptures that are interpreted as God changing his mind,” said Carole, “are humans trying to interpret the character of God. God always knows what he is going to do. He doesn’t make it up as he goes.”

In other words, God knows the future, and in the cases of the Israelites and the Ninevites, he knew what kind of reaction he would get to his words of admonition. His mind was set. It was his people who did the changing.

I like Carole’s point of view. And I guess when it comes down to it, if God changed his mind about his love and commitment to us that would put us all on very shaky ground with him wouldn’t it? And you would never be quite sure where you stood with him each day.

I take a certain comfort in the scriptures below, knowing that I serve a God who is steadfast.

In last night’s episode of Downton Abbey, I watched as the characters were introduced to the gramophone record player. In comparison, my parents told me this morning that they had just purchased speakers for their laptop so they could hear their music better.

We’re changing by leaps and bounds aren’t we?

I for one am glad that God stays the same.

Here are some Bible verses that'll help you on your journey:
Malachi 3:6 Living Bible

6 “For I am the Lord—I do not change. That is why you are not already utterly destroyed, for my mercy endures forever.