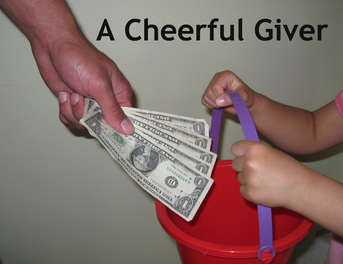 Many of the people who walked out of Wal-Mart’s doors that sunny Saturday couldn’t resist the waiting ball players and their fundraising buckets.

It was what our local Little League calls “Can Day,” and my daughter was there in full uniform looking cute as a button. It was definitely hard to say no to her or any of her teammates.

I supervised her with watchful eyes as she helped raise funds for her team, making sure she had a hearty “thank you” for those who chose to give.

It was an interesting time of “people watching” for me as I studied the different ways folks responded to the kids' fundraising efforts.

Normally the table is turned, and I’m that busy shopper coming out of Wal-Mart’s doors.

I see the baseball uniforms or the fundraising signs, and I make a quick assessment of the situation. I’ve already spent too much, and there’s no way I can give up any more cash, right?

Carefully, I avoid the eyes of the fundraisers, and I move quickly on my way.

Phew… got myself out of that one … just think about the dollars I saved!
_ I saw myself on that Can Day as I watched the people who do the same thing as me.

Avoiding our eyes, they looked straight ahead or pretended to look for their cars -- it was all me.

And, standing there watching those people, I discovered that there was someone else I’d rather be when it comes to giving.

You see, the people who took notice of the children, who opened their wallets and brought out a dollar or two or who jingled around in their pockets for a few spare coins, got to experience something wonderful.
I could see it written all over their faces.

There’s sort of a “mutual blessing” that takes place when someone chooses to give isn’t there? It’s a win-win situation for both the giver and the receiver.

It’s easy to think sometimes that giving is irresponsible. We all have bills and people who depend on us right? And, if you’re like me, just taking care of our own can get pretty stressful.

But when we dig into God’s word and study a bit on giving – we can get a whole new understanding of the concept.

In Luke 6:38, the Bible actually says that we are blessed when we give: “Give, and you will receive. Your gift will return to you in full—pressed down, shaken together to make room for more, running over, and poured into your lap. The amount you give will determine the amount you get back.”

_ Long ago, I visited a church that chose to make it’s offertory a time of celebration. Congregants whooped and hollered with joy as they “got” to use some of their own earnings to further the work of the Lord.

Now I’m not saying that we are to give without seeking God and using discernment. Our tithing to our church should be already worked into our budget, but any extra offering we give needs to be met with prayer.

I remember when Bill, a Christian friend from high school, called to set up a lunch meeting with me soon after I graduated from college.

Over our fast food, Bill explained that God was calling him to minister to college students through the Campus Crusade for Christ ministry. He told me that he needed to raise his own support.

After talking with Bill, my gut reaction was to say no to helping him financially.

I was on my first job then, and I didn’t quite get how my paycheck was going to help meet Bill’s needs too. But the more I prayed about it, the more God began to show me that I was supposed give a monthly portion of my paycheck to Bill.

I never regretted giving to Bill and the Cru ministry. It helped me understand that I was investing in something bigger than myself.

Yesterday as I walked into Wal-Mart with my daughters, there were two teen girls in soccer uniforms waiting at the door. One of the girls asked for a donation, and I truthfully told her that I had no cash.

When we went inside though, my daughter politely asked me if we could bring some money out for the girls. I was proud of her for asking and made sure to get some bills inside.

As we left the store, I found myself excited to give to the girls. It was just a couple of dollars, but again the moment of blessing came. And it was so much better than ignoring them.

Just think of what I would have missed had I walked on pass.

2 Corinthians 9:6-7 New Living Translation
Remember this—a farmer who plants only a few seeds will get a small crop. But the one who plants generously will get a generous crop. You must each decide in your heart how much to give. And don’t give reluctantly or in response to pressure. “For God loves a person who gives cheerfully.”

Deuteronomy 15:10-11 New Living Translation
Give generously to the poor, not grudgingly, for the Lord your God will bless you in everything you do. There will always be some in the land who are poor. That is why I am commanding you to share freely with the poor and with other Israelites in need.

Proverbs 28:27 American Standard Version
He that giveth unto the poor shall not lack; But he that hideth his eyes shall have many a curse.